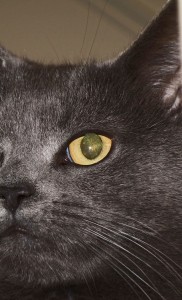 Morgan: Don’t worry. I’ll save you from marauding mice!

All the action in this house happens in the middle of the night. Always.

Last week I posted about the mouse that Morgan, my one-eyed mouser cat, snuffed out and the rehoming. (If you missed it click here.) I was hoping that was the end of the story. With mice it never is. They come in groups. I should have known!

For a few nights after the big “mouse catching” incident, Morgan slept in the basement. It made me nervous but then again maybe she was being cautious. She is very serious about her mouse duties.

A few nights later I heard a cat yelling….around 3 a.m. (Didn’t I tell you it always happens in the middle of the night?) I pride myself in being able to tell my cats apart by their sounds. I was sure this was Hazel, my overly plump older cat.

As cats age they can get disoriented during the night and they will cry. I’ve had two cats do that for the last few years of their life. I was hoping that wasn’t happening.

Hazel: Sure I need a snack. How about a scratch behind my ear?

Hazel is not a very vocal cat but she was whining. After ten minutes or so I went down and she was lying on the dining room floor. I scratched her, talked to her softly and gave her a snack. Then I went back to bed. Half an hour later I heard it again. The beloved husband sighed so I decided to check on her. She was blissfully lying on the dining room table (no she doesn’t belong there).

I talked to her, scratched her, fed her (yep again) and brought her upstairs so she could sleep on her favorite chair. That was it.

When I got up the next morning the beloved husband informed me that there was a dead mouse in the living room. Morgan was pacing at the bottom of the stairs very intent. I know that look. Something was there. The beloved husband assured me that he checked and there wasn’t anything.

There was a tail next to a bucket at the bottom of the steps. I don’t know about your buckets but mine don’t come with tails. Within ten minutes I captured and rehomed the poor thing.

Then I had a discussion with the cats. It was not Hazel who was whining, it was Morgan’s hunting call. I don’t hear it often enough to recognize. However, Hazel did not mind the extra attention and two snacks in the middle of the night and hopes that we continue this “tradition.” (Fat chance of that happening!)

As for Gracie, according to Morgan and from what I saw during my rehoming episode, she was hopping around yelling, “Let me see, I want to see the mouse. I can get him. Come on. You’re in my way.” Interested but definitely useless.

Oldest cat Mollie slept through this event. She was on the bed so she also could hear Morgan’s hunting calls but obviously didn’t care. Hazel was amused but not enough to move. My two one-eyed gray cats were the only ones with any interest in mice.

The take-away is that my two older cats are definitely retired and on a cat form of social security. One-eyed cats can find mice as well as two-eyed cats. If there is a cat whining in the middle of the night, something’s going on.

One more thing — when you aren’t there to see, they do things they are not allowed to do (but you already knew that, didn’t you?)

I am hoping for a peaceful week where I can sleep through the night without interruption from smoke alarms or hunting cats.