It’s a peep today! Gracie went to the casino to play slots and the other cats are in a food coma after breakfast. That leaves me to fill you all in.

I had my booster shot this week and had an “I don’t feel good” day. I slept most of the day. My cats rarely sleep with me unless I don’t feel well. I don’t know how they know. Maybe I put off a scent that they pick up on. Maybe it smells like bacon. It can’t be bad because they all comes running. Gracie moved downstairs to watch over and has been sleeping with me ever since. She prefers to sleep on my legs so I can’t wander off. 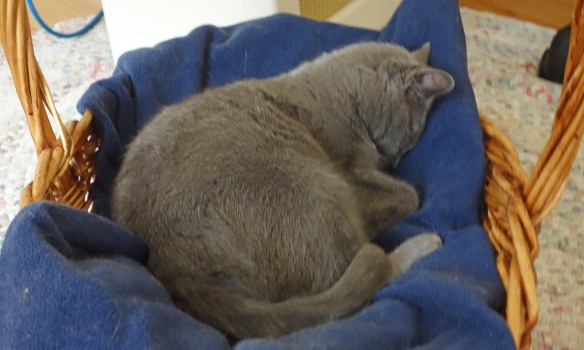 I’ve heard those stories of cats staying with dying people until they pass and wondered if my cats knew something I didn’t. So far I’m still here and Gracie is still sleeping with me.

There have been some tussles between Morgan who is normally a laid back cat and Gus, also a laid back cat. Perhaps they were so laid back they annoyed each other. Gus is bigger by about two pounds but Morgan gives as good as she gets. It’s just a “wop wop” with maybe a short chase. Nothing like the wrestling and rolling around that happens when Sasha gets involved. Sasha is like a sack of potatoes. Overall the cats get along fine but they are just like people. Somedays they are cranky.

Gus and Morgan getting along just fine!

Speaking of cranky, next week starts a long project with outside people in the house every day. I’m starting to plan on new feeding stations so everyone feels safe (that includes the peeps too). Sasha will not be happy. Everyone else will resign themselves to it for the duration. More treats will be in order. Mocha lattes for me and tuna for the cats. Gracie gets catnip. She doesn’t eat treats. She may be the smartest one of all. Nothing like some weed to calm you down. I wonder if catnip works on people.

That’s it for this week. One of the cats will be back next week. We all wish you a great weekend.