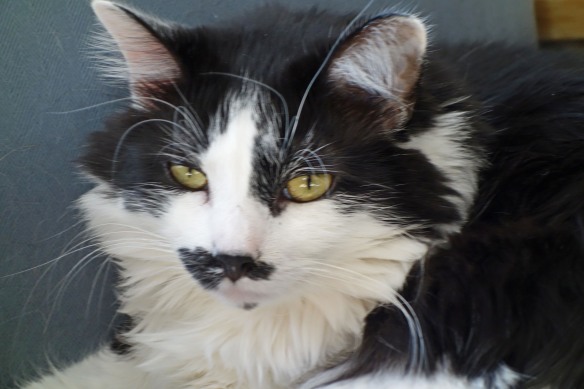 All the cats wanted to tell Sasha’s story. The versions are from different viewpoints but I thought Sasha’s version should be first. Some of them think Sasha is a wuss.

Sasha: We had interlopers staying here for a week. They looked scary and were so many. I had to hide. There isn’t a lot of places to hide in this new place but I found one the peep didn’t know about so on the day that everyone was here celebrating something, I retreated to my newfound hidey hole.

The peep kept an eye on all of us to make sure we didn’t get in trouble (or out). She made sure we had food at multiple places in case there was a stranger lurking near our food. All was good but she didn’t know my new spot. I stayed hidden for six hours. The peep was okay for the first few but got a little nuts. Peeps always want to know where you are. Pffft! Not gonna happen.

Just about dinnertime, when I didn’t come out for food, she was obsessed with the concept that I got out of the house. I’m totally indoors only so she feared I wouldn’t know what to do or where to go. Again pffft! There were searches. Some of the strangers searched too. They even got the cat lady neighbor involved. Nope I wouldn’t come out. This was too much fun.

When it was fully dark and the peep was desolate at losing her bestest cat, I popped out to surprise her. She almost smothered me with hugs. She still doesn’t know where the new hidey hole is and I like it like that. BTW I’d never go outside. I have everything I want inside. Food, poop box and adoration. 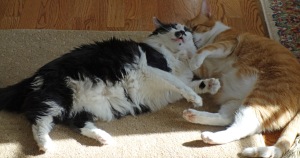 Gus: I missed you!

Gus’s version: Lots of scary people but if you sat around the perimeter and watched for a while, you got used to them. They gave scritches and played with me. It wasn’t so bad except my bestie wasn’t with me. I would have comforted her and given her head licks. Since I couldn’t do that, I ate her food. It was tasty.

Morgan’s version: So, there was like lotsa peeps here. Scaredy cat Sash hid. Everyone went nuts. I didn’t understand why as I was still there. I am the perfect cat. Just ask anyone who lives here.

Gracie’s version: Nutcase Sash got her panties in a bunch and hid. I was too busy to care as there were laps to hop on and feather toys to catch. I like visiting peeps. They keep Sasha away and I get the toys all to myself.

The peep version: Sasha disappeared in the early afternoon which isn’t unusual when there are guests. It’s unusual that I couldn’t find her hiding spot. It was unusual that she didn’t come out for food. That took the stuffings out of my day. My worry-wart ringer was off the charts.

I was convinced she got outside. I searched the grounds every 20 minutes and even stalked the neighbors’ yards. I was on my last outside trip when I saw her in the basement looking out the sliding glass doors. I’m convinced she was laughing at me. She ate a full can of cat food which she said she deserved especially since Gus ate all her food. The rest of the trip was okay as I know her hidey spot is in the beloved husband’s workshop but I still don’t know exactly where. I need to put a GPS tracker on her! Mostly black cats in dark hiding spots are very hard to find.

It was an exhausting several days for Sasha but now she’s back to normal and resting up in her favorite spots.