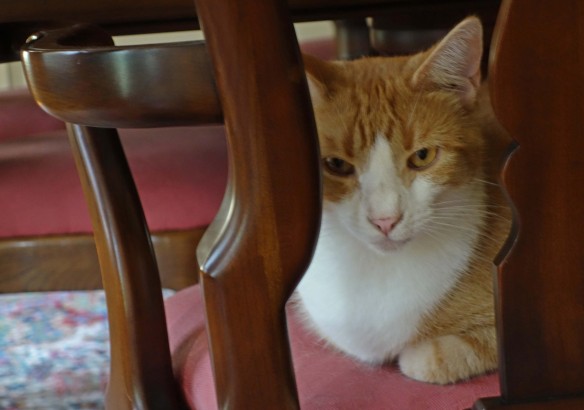 She cleaned my ear!

Dental treats are the kale of the cat world – I’ve never been big with treats for my cats. When I had Hazel I had enough trouble keeping her weight down without added high fat treats. With Sasha the vet suggested dental treats to keep her teeth and breath fresh. She and Morgan loved them. Newly adopted Gus ate them but he really liked Temptations which is the cat crack of all treats. I thought it would be useful to have some on hand to during his acclimation. I was right. What I didn’t realize was that Sasha and Morgan would love them too. If I shake the container, the three cats come running. (Gracie doesn’t eat treats. They are beneath her.) Neither Morgan nor Gus will eat the dental treats now. Sasha will eat anything that isn’t nailed down. I have a big container of healthy dental treats that will last a lifetime. Definitely kale.

He’s a weird dude! – Gus still hasn’t gone down to the basement. He doesn’t like stairs but he goes upstairs with the occasional misstep or tumble. Steps are not his thing. He won’t try the uncarpeted basement steps. He has powerful back legs and it wouldn’t surprise me to see him on top of the fridge. 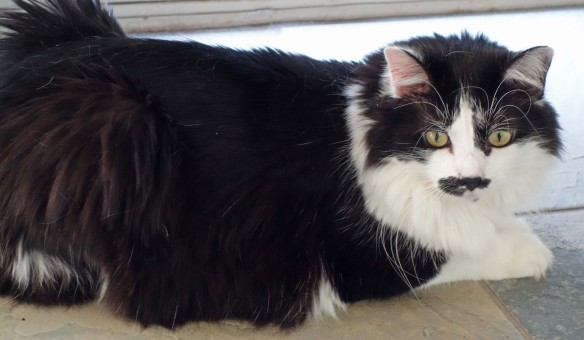 She cleaned my ear first!

He can smell sneaky – Sasha has to get one of her ears cleaned at least once a month. It may be a yeast infection. Next vet trip I’ll have the vet look at it. In the meantime I clean it out monthly to keep it in check. Gus also has an ear that gets black stuff in it. After I did Sasha (and she is a diva about it, screaming and announcing to the world that I am killing her), I decided to clean Gus’s ear. Nope, he wouldn’t let me near him. That’s ok. I had all day. Three hours later as he climbed up on the dining room table (where he isn’t allowed), I grabbed him and cleaned his ear. True to form in this house, he screamed that I was killing him. Sasha taught him well. He’s good for at least a month.

All the critters here wish you a good weekend and no one can believe it’s the end of August!