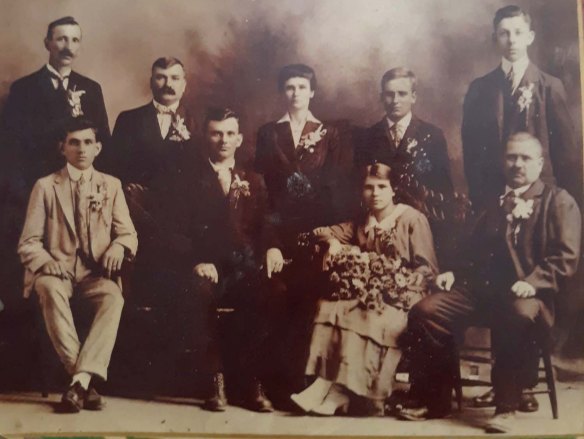 The bride is my Aunt Mary (my mother’s sister). I suspect the older man to her right is her dad, the mysterious grandfather of whom I have no picture. The young man standing behind her is most likely one of her brothers. Based on the ears, all the other men are related to the groom. My family does not have taxi door ears!

Some people are doing puzzles. I’m doing ancestry research. I lot of what I do is figure out who is who, verify important dates and post high school yearbook pictures (yes it’s good for a laugh!).

This has been a great year for me. Early in the year someone from Austria contacted me to help identify pictures. He had a professional portrait of my dad’s entire family taken when he was around 10. This is the only photo I have of my paternal grandmother. I knew she looked like one of her daughters but having a real picture is fabulous! It’s also the only picture I have of my dad as a child. Here is the original post with the picture.

It’s not easy. Women often died in childbirth. Wives who died were quickly replaced. There were kids to be raised and more to be born. Some men had three wives in their lifetime. Makes tracking harder. Of course many had the same first name too. Back then, people weren’t creative about naming babies. No Moonunit or Tallulah!

I thought that was my treat for the year but this past week, another distant cousin contacted me with some questions. He sent me a professional picture of his great-grandmother’s wedding. She was my mother’s sister. I have pictures of her but in this one there is an older man next to her. I think it’s her dad, my grandfather. He died in 1918 and I don’t have any photos of him. From information I have found from his draft card, the vague details (average height, stocky build) fit. I am over the moon.

He also had a photo of my mother’s older siblings. It was taken before she was born. I can see a family resemblance but it’s much harder with such young children.

This is my silver lining. I’m not the only one doing research. Maybe I’ll find another distant relative with some information I don’t know. Just like puzzle pieces. Sometimes you have to jiggle around to see where they fit or if they fit. I have a few loose ends that may or may not be related to me! I found some weird stuff too. Two very distant (very, very distant) relatives were jailed for murder.

Maybe I’d rather have a box of chocolates!

62 thoughts on “The old rabbit hole…again”