Is this the shore? – I walked early this morning and there was a familiar feeling. We often go to the beach between now and the end of September. Mornings are hazy and humid, then the sun comes out and clears it up. Perfect weather for coffee on the deck. (OK, there’s a crumb bun too!) That’s exactly what it felt like – hazy and humid. No beach this year but at least I got a taste of it minus the sand. Sadly it was minus the crumb bun too. There is nothing like a Jersey crumb bun!

Hello?  – One day this week we started to get fraud calls every 10 to 15 minutes. It was the same number. Even though we didn’t answer and turned down the volume it was annoying. We tried blocking it. We called our phone carrier and because it was an 800 it can’t be blocked (that’s what they said). We called the government number to report it. Finally we unplugged everything. It’s our landline so we have cell phones available but neither of us carry them around. We can hear the ring of the landline everywhere in the house and nearby outside. Unplugging solved the problem. After 24 hours we hooked up and Mr. Nasty was gone. It may have been the dialing software going haywire but it was illegal. The caller kept telling us our iCloud was breached. We don’t have any Apple products, therefore we have no iCloud.

Unplugged – There was a nice side to being unplugged. Peace and quiet reigned. We don’t get many calls. Most of what we get are telemarketers. Didn’t miss them one bit.

Logic reigns — For those logical thinkers wondering why those old folks (that would be us) have a landline, it is part of a cable-internet package and it’s cheaper to get the package than just the cable and internet. We are also not good about carry cells – charging, carrying in nonexistent pocket, etc. We have elderly relatives (OMG! I’m going to hear about that!) who may need us. 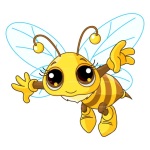 Goodbye bees – Our neighbor who recently sold her house had bees. Yesterday the local bee club came to move them. I remember when she first started beekeeping. Some neighbors were up in arms. After all bees! In our nice neighborhood! Imagine that! I welcomed them. They pollinated my tomatoes and other garden plants. Honey bees don’t sting unless stressed. I never stressed them and they never bit me. That’s more than I can say for the crazy wasps that ripped up my arm and sent me to the walk-in center for a steroid shot. Twice!

Our beach vacation with our siblings from 2013 when everyone was healthier. Oh yeah, and younger!