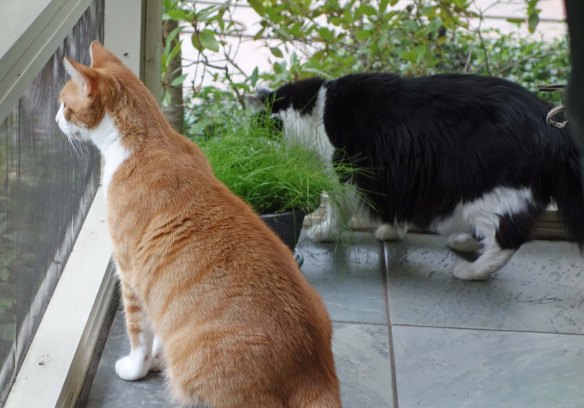 Gus and Sasha on the porch

It was three weeks yesterday that Gus moved in (I can’t believe it either!). He quarantined himself in a closet for three days. Then preferred staying in the cat room for another week.

By then he had an eye infection that required a vet visit. I hate taking a new cat to the vet. You are trying to gain trust so you jam them into a carrier, cart them off to a strange and funny smelling place and then put drops in their eyes for a week. Not a warm fuzzy beginning. 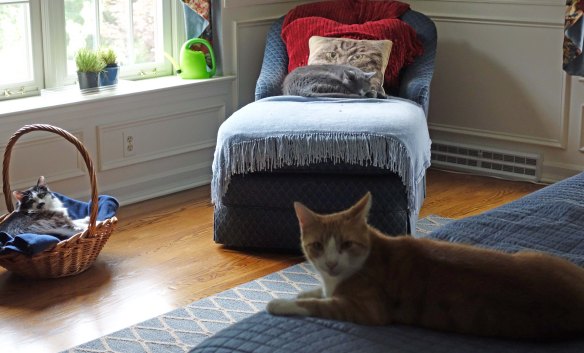 Morgan, Sasha and Gus napping in the bedroom! Or maybe only Morgan is napping!

He took his time coming out. Gracie spent a lot of time with him and Morgan too. Sasha not so much. She gave him stink eye and the occasional sneer. She blocked doorways so he’d have to jump over her like a quarter horse at the Kentucky Derby. She tried to steal his food and his beloved treats. Gracie whopped Sasha on the head to bring her in line. I find that amusing as Gracie is 8 pounds and Sasha is 12. You always want Gracie in your corner! 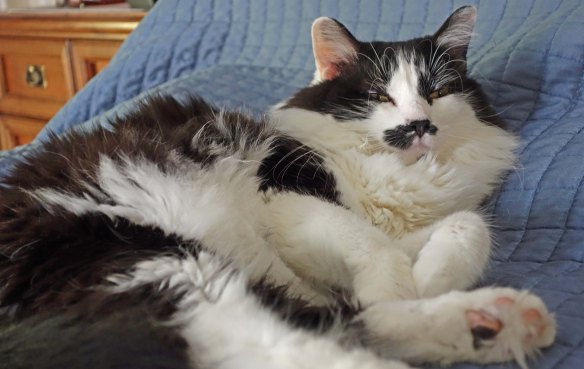 Sasha: I did not do all those bad things! Well, maybe just a little.

When I gave the drops, I followed up with treats, a well-deserved reward. Somehow that translated into all the cats except Gracie who doesn’t like treats, thinking they deserved some too.

When I pulled out the meds, Morgan and Sasha appeared out of the woodwork and Gus tried to blend into the woodwork. It’s over now except for the weaning off of the treats.

Gus, like his friend Gracie, is quirky. This is his first time in a house. He did a three-year stint in a rescue. He won’t walk on the carpeting on the stairs but walks down the 3 inches of wood on each side of the carpeting.  He likes cat grass more than catnip. Maybe it’s the novelty.

We’re teaching him how to play with toys. He watches but takes time to engage.

He lived in one room so the concept of multiple rooms amazes him, as did furniture, soft cushy furniture. It didn’t take him long to realize a bed was prime real estate. He hasn’t realized that hiding under it makes it hard to medicate him.

I don’t think he’s been down to the basement yet. He finally stepped into the screened porch on Wednesday. He was tentative. Thursday morning he was not. He was running laps to show a pesky squirrel that he meant business. That resulted in a very long afternoon nap in his yurt.

This is his yurt.

He likes yurts. He barely fits in them but he feels safe. They didn’t have yurts at the rescue but they had hidey holes. Sometimes I wish I had a hidey hole.

Three weeks down, a lifetime to go. Welcome Gus!