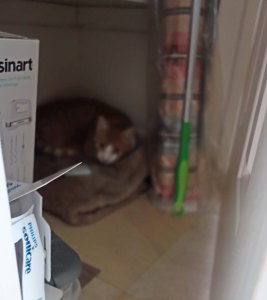 Blurry but the best I could do without terrifying him.

If you read last week’s post, you know that Gracie found a “friend” on a feline dating website. He moved in quickly and as things go, he and Gracie are besties.

Whenever a new cat comes here to live, they stay in the cat room for a few days to acclimate to a new environment. There are other cats here they may or may not like and funny smelling humans to get used to. He chose to spent most of the first three days in the closet.

Gracie was having none of that. She went in the first day and spent a lot of time with him. Just sitting nearby to help him to feel at home. (Yes I was surprised. She didn’t give Sasha that warm a welcome!)

Happy on his cat tree. You can see his eyes are good here.

Sasha is unsure of him. He smells manly (testosterone?) and she’s not sure what to think of that. Will he eat her food? Steal her toys? Will he give her the adoration she is used to? So much unknown. To show her superiority, she caught a mouse (yes another in the house). I was able to intercept it before she presented it to him.

Morgan as always said “whatev!” She is the perfect cat. Always has been and always will be.

The new guy is named Gus. He’s three years old and has been at the shelter since he was eight weeks old. It was time for him to have his own home.

Noshing with Morgan and Sasha on a fresh pot of cat grass.

After he was here a few days he developed a weeping eye. Since I already have two one-eyed cats, I went into overdrive. I found a new (to me) vet that would allow me to come in with him. He’s scared enough about life without something old and familiar (that would be me) around. They think it’s a herpes infection but we’ll see. He didn’t have all the usual symptoms – just weepy and mucous-y eyes with sensitivity to light.

The worst part is the eye drops. He gets five drops a day in each eye. We didn’t have enough time to thoroughly bond. He thinks I reek of deception and I do. While I’m being all sweet, I’m maneuvering him into a burrito for eye drops. They may sting as he makes a fuss but I think they are helping. We have another week to go. I fear he may go back on the dating site to find a house without deceptive humans that take him to the vet.