Author’s note: We hosted a family reunion this past weekend. The cats were not happy about the change in routine, sticky people and delays in dinner. Here are their thoughts. 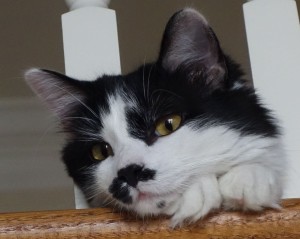 Sasha: Are they gone yet?

Sasha: I am Sasha, prima ballerina and in charge of all nonsense. The humans had thousands of people here last Sunday and no one brought catnip. Not a tuna dish nor a crunch. No feathers, strings or grass. Don’t their mamas teach them to come with presents? What kind of rock concert has no grass? I stayed under the bed until the firestorm was over. My human had to coax me with some food. I conned her into a WHOLE can for me, me, me! #can’tbuymewithfood #maybeyoucanbuymewithfood

Morgan: The bloody residents had a bunch of philistines here last weekend. Loud and noisy. It was very hot. I napped until dinner which was late. I considered bringing a dead mousie for dessert. That’s a great way to clear a house.  #stickyhumansyuk #whereisdinner #nomousiesforyou 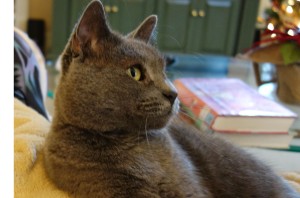 Gracie: I came down after happy hour to check for snacks. Nada. What a bunch of freeloaders. No prezzies for the cats. I gave the others a “no tuna” report. We considered calling cat protective services but were working on Morgan’s mousie angle. I rubbed some legs and allowed a few head scratches. They don’t get to spend time with such a fine feline at home. The humans were sweaty so I left fur on their legs. I prefer floofing my tail across their lips but it only works with lipstick or gloss. #hopingIdidn’tpickuphumancooties #humansneedfur #don’tmesswithcats #furrylips

Mollie: What? We had company? No presents? Whatev! #seniorcatdoesnotgiveafig

And that is the reunion report from the four felines.