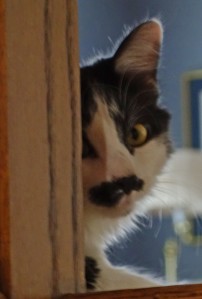 We are coming up on three weeks with this new girlcat and it seems like she’s always been here. That is the sign of a perfect adoption. It doesn’t always happen that way.

Gracie’s initial time here was stressful because she had health issues that culminated in dental surgery and special food for crystals (and Xanax for her owner!).

Morgan came with parasitic amoebas that made us all crazy with meds. That experience produced one of my favorite posts about medicating multiple cats including old cat Jake who was very vocal about it.

Sasha was seamless. No drama. I kept waiting for the shoe to drop and it hasn’t…yet.

Part of a feral colony, she was trapped when she was a very young kitten and socialized by a rescue group. Like many cats, she didn’t do well at adoption events preferring to hide from the hordes of people who came to see her beautiful markings. She spent almost a full year in rescue. A long time for a young cat.

I was connected through a friend. I had a vacancy although I wasn’t expecting to fill it. There was a need that I couldn’t ignore.

She came home between snow storms. She has an in-door voice that is soft, high-pitched and squeaky. It’s rather cute. You can barely hear it. Unfortunately her other voice sounds like a full-grown bull moose in heat and she used that voice to sing the song of her people on the hour plus ride home from her foster mom. Yikes!

Part of the soccer match

She was shy for exactly 24 hours. She is besties with Gracie and has joined the in-house soccer team that plays at 3 a.m. She is the goalie. It’s all the hooting and hollering. I keep checking the walls for dings.

She is a voracious eater and cleans up everyone’s plate. Sometimes they aren’t done eating. We have to send her to manners classes although Mollie’s version is a swat on the nose. Quite effective.

She loves playing and lying in sun spots. She also loves climbing in a warm lap for a nap but not for long. She has things to do and cats to annoy.

Lucky for me, she doesn’t take a bad picture.

83 thoughts on “Sassy cats – The book of Sasha Moo-stasha”