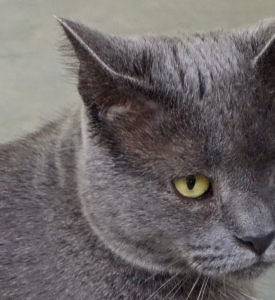 When Gracie, the youngest catkid was adopted in January, there were a lot of food issues. She wouldn’t eat anything. Then only dry. Then only real chicken. Then only chicken cat food. Then back to real chicken. (When I say real chicken I mean the stuff I roast myself without any salt or flavorings. She’s not fond of rotisserie chicken which would be so much easier.)

It took months to get her to a point where she ate the same stuff the others did. (In the meantime, tubby Hazel gleefully consumed anything she didn’t like. What a trooper.)

She started this after I stocked up with two cases of chicken cat food. Turkey cat food is her current favorite. I even caught her eating beef cat food, a flavor which she tried to bury in the spring. 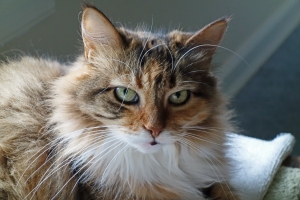 Only gravy! No lumps! Use a strainer!

Mollie only eats gravy (and dry food). She will leave all the food lumps in her plate (for Hazel to clean up).

Morgan eats mostly dry with some wet. Sometimes she eats a lot of wet cat food and sometimes none at all. She is not fond of chicken cat food (yes, that’s the one with an inventory of two cases).

Hazel, glorious Hazel, will eat anything that isn’t nailed down. That’s the good news and that’s the bad news. Every family needs a Hazel.

Here is the typical dinnertime conversation.

Me: Dinnertime! Come and get it. Friskies chicken!

Hazel (with enthusiasm): Oh, my favorite. Feed me first, feed me first! (Picture a fireplug dancing around!)

Morgan (bored and not interested checking her nails to see if she needs a manicure): Again? Didn’t we just have that last week? Or was it yesterday? Just a little and not the big pieces. Don’t give Mollie all the gravy.

Mollie (with authority as the alpha cat): Just the gravy please. No lumps. Last time you tried to sneak in lumps.

Gracie (as the spoiled kid who only eats mac n cheese): Ewww! Like what were you thinking? Who would eat that? I want Fancy Feast. I want sushi!

In the meantime we are grabbing our car keys to get a pizza and beer! 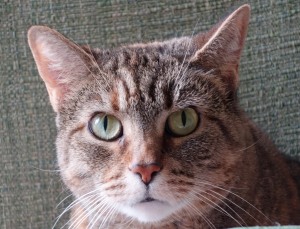 I’m the good cat. I’ll eat anything. Do you have something in your pocket?