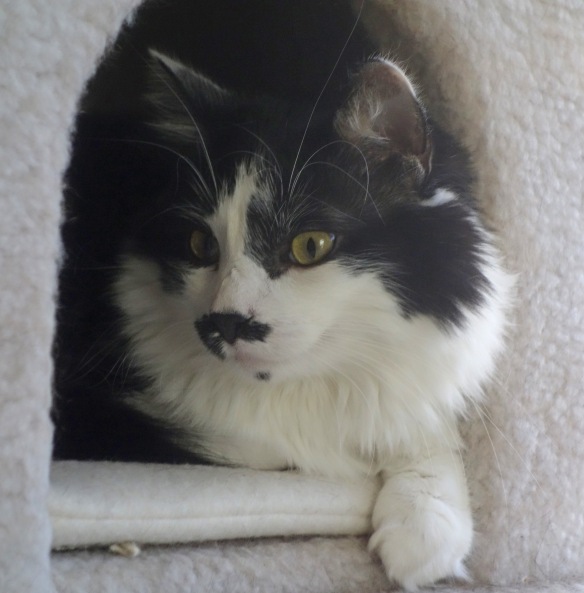 Living with new cat Sasha is like living with a 12 year old boy. She is the only cat that likes to sleep UNDER the covers. The other night she snuggled up next to me under the covers. We both fell asleep. About 20 minutes later there was a rumble going on. She couldn’t get out of there fast enough. I threw the covers back to release her. I also released the biggest toxic gas bomb ever! My eyes watered. Old cat Mollie left the room. Obviously Sasha can stand the smell of her own fluffers.

Sasha: Look at the tail on that squirrel!

Cat TV was in full effect this week. That’s when I throw some seeds and corn out for the birds and squirrels and our cats perch inside the sliding doors to watch. Keeps them occupied for hours. Cheap entertainment!

The tree went up this week. So far Sasha hasn’t shown any interest. We heard a tinkling sound and checked to find three cats sitting under it. They looked at us like “nothing going on here. Move along.” So far not one ball has been batted off.

We all wish you a great weekend!

Update: There was a small squirmish  under the tree between Sasha and Gracie. It resulted in a redesign of the tree skirt. Felines think it’s an improvement. Human folks are rolling their eyes. We’ll see. Pictures to come.