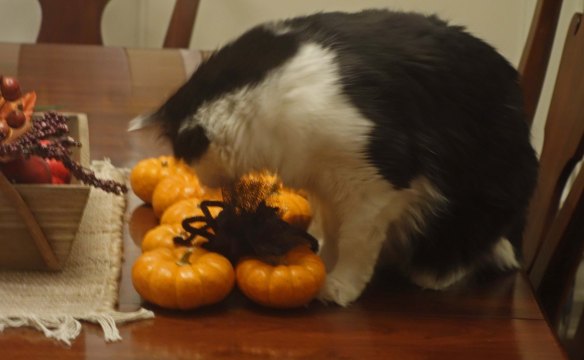 Sasha: Bad spider! I will dedded you!

There is no doubt who was redecorating with the pumpkins on the floor! I caught Sasha at it. In this picture that black thing on top is a spider made out of chenille pipe cleaners and tull. I’ve had it for many years. (I have a whole series of blurred pictures where she is throwing the spider in the air and pawing the pumpkins!) This year I have often found it on the floor full of saliva with the legs all contorted. No need for DNA test. I know who did it! Back in the day, it was Mollie’s toy!

Another odd thing — Gracie has locked herself in the powder room twice in 24 hours. It’s a tiny room with not much in it so I’m not sure what she finds so fascinating. She was fortunate that we found her quickly. Both times the throw carpet was on a pile, the trash can on it’s side and the basket of extra toilet paper scattered. She’s a cat. I’m not trying to make sense out of it. She’s been here almost three years and it’s the first time she’s shown interest. Whatev!

Everyone here wishes you a great weekend!

46 thoughts on “Sassy cats — Catching up”