I did not have bad poops! They just were interesting.

For background, when Hazel was having issues with very stinky poops (VERY STINKY), I tried all kinds of things to keep the house from smelling bad. Even if I cleaned it up right away (using a gas mask!), it took a while until the smell dissipated.

I tried a few things and settled on a plug-in that wasn’t too strong. Scents aren’t good for cats and some cats react to them. Sprays land on their fur and they lick it. Not good. I used a plug-in that was a very mild vanilla. I used it in strategic hallways rather than places where the cats hung out.

A while back (maybe a year or two), Mollie started scratching all the time. Behind the ears, on her belly, the back of the head, places she couldn’t reach. The vet thought food allergies. Diet changes didn’t help. I started to dose her with half of an allergy pill (for cats). It lessened the scratching but didn’t eliminate it.

Recently the upstairs (where Mollie spends most of her time) plug-in was empty and I opted not to refill it. No one has stinky poops now and my three cats all cover the offending turds.

Mollie’s scratching hasn’t stopped but decreased substantially. She may be allergic to odors or scents or chemicals rather than food.

I use an electronic air cleaner with a UV light for odors in the basement near their litter boxes and that helps without making anyone itchy.

Mollie did not like getting pilled so we are all happy campers here!

Everyone here wishes you a great weekend. The cats are looking forward to the snowstorms predicted in the northeast. Their owner, not so much. I hear she is counting the days until spring. 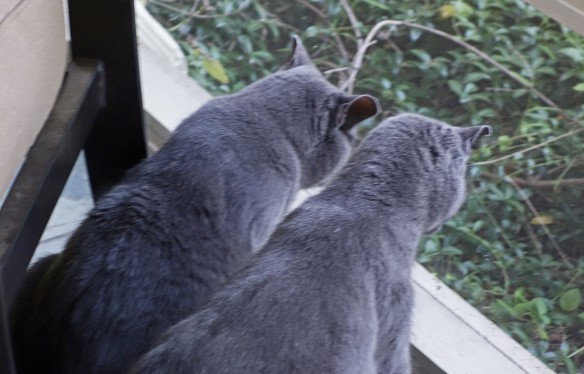 Morgan: Yes little grasshopper, we will get white stuff this weekend and all this will be covered. It makes the humans say bad words but look sad and maybe we’ll get treats!

83 thoughts on “Sassy cats – Mollie’s mystery allergies – does she or doesn’t she?”