Ever since new catkid Gracie joined the household, Hazel has bloomed (and I don’t mean personality-wise!). She has slowly hoovered up food while Gracie was busy being finicky.

Gracie refused to eat. Then only ate dry. Then ate nothing again. Then only ate wet, only certain varieties. During this, her peeps were opening cans and bags of every conceivable cat food made (cha-ching, cha-ching).

This went on for months. To some extent it still exists. Gracie says she is a gourmet. She likes a newly opened can and always clean plates. If food is out for an hour, she would prefer that you transfer it to a clean plate so she can finish it. Although we love her, she can be a douchebag about food.

Hazel, being her wonderful OCD self, cleaned up any morsel that was lying around. On plates, under chairs. She even learned to move the food plate a little to see if any had slipped underneath. She’s no dummy.

Unfortunately her activity level did not go up. Hazel’s idea of exercise is walking to a food dish or moving her paw six inches. Never her whole body. 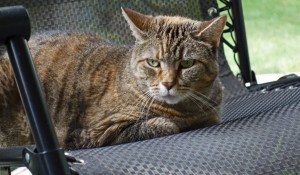 This is from her thinner days. She’s not all jowly looking here.

She had once before blown up (no other word for it) when my old cat Jake was having food issues. It took the better part of a year to get her to lose weight. Her all-time high was close to 18 pounds. For her frame, she’s should be a 10 pound cat. If she were human, you’d call her morbidly obese.

Over the past couple of months we have started her on a diet (of sorts). Every time we were having some luck, Gracie would act up with a food issue. After many false starts, I decided that this week would be the “real” start. (Ever the optimist!)

In order for this to work, the cats have to cooperate. They have to eat their food when it’s put down and not graze. Morgan and Mollie get their food on top of furniture where Hazel can’t jump. Gracie, bless her heart, gets a “food companion” (that would be me) who guards her until she is done. If she doesn’t finish, it gets put on top of the counter until she shows interest again. (I’m weaning her off the clean plate routine too.)

Hazel, despite her thunder thighs, has learned to jump up to get at Mollie’s hard kibble. It’s a hard jump and she doesn’t do it often, maybe once a day and only when I’m trying to cut back.

Despite all of this, I feel like we made progress this week. However, a visit to the scale showed that it was all in my head. *bangs head on table*

Next week is another week. Hazel may have a few tricks up her sleeve so I will need to be vigilant. Never underestimate the power of a chubby cat.

Here she is now. Now that’s some belly!