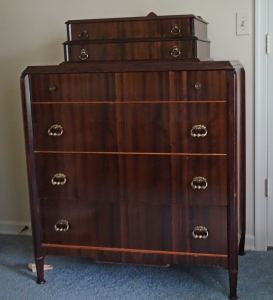 We are moving things around again. Rearranging stuff so I can put my sewing machines on the second floor and out of the basement. A chest didn’t fit the new configuration. It had to go. It was my mother’s chest.

It was part of her bedroom set. Purchase date was sometime in the early 1930s. It predates me by a lot.

I’ve been struggling with this change for a few months. I don’t have a lot of stuff from my parents. Nothing of true value really – a couple of coffee mugs that my mother used every day, her baking spoon and this chest. The chest was the biggest piece. Parting with something that dear took a lot of thinking.

I haven’t used it for anything except obscure storage for the last 20 years. (Obscure storage is junk that you should throw out but you store it someplace out-of-the-way because you can’t part with it.)

Did I mention it’s large? Some people call them highboys or chest-on-chests. Big drawers on the bottom and two drawers suited for jewelry or wallets on the top.

The chest itself wasn’t so hard to let go. Someone in the family wanted it. I no longer needed it. You can follow the logic here. Makes sense especially as it frees up space that I can use.

Except….it smells like my mom’s bedroom. It’s not a bad smell or musty smell. It’s a wood smell. It’s old mahogany, dark in color and heavy in weight. Whenever I opened a drawer, I could smell my mom’s bedroom. I could almost see her nightgowns and my dad’s flannel shirts folded safely many years after he passed.

Her jewelry was kept in the top drawers, mostly a collection of costume jewelry stored in velvet boxes. When I was around 12, I took a blue velvet box to bury my canary. We had that canary for several years and she deserved the satin-lined velvet coffin she got. (Mom wasn’t happy about that but didn’t want to dig it up with a dead canary inside.)

There were several pieces all kept in their bedroom. Lots of wood. I remember the bed with a headboard and footboard. I could do a flip over the footboard but only when no one was watching.

There was a vanity with a big mirror and drawers on either side. It came with an old-fashioned secretary too.

I don’t know where they are now. I only took the chest.

As my niece loaded it up in the pick-up truck, I stuck my head inside and took a last deep breath. I told her that when I needed a fix, I’d come and smell her chest. She laughed. Perhaps she didn’t realize I meant it!

69 thoughts on “The smell of childhood”