Gracie is hiding under the cat tree. She’s hoping I can’t poke or prod her from there.

It’s the peep. Gracie is in hiding. The “portal to hell” is out and she suspects it’s for her. It’s the smallest carrier. At this point, she’s the only cat who fits in there.

She has always had ear issues. One gets goopy. I clean it out and in a few weeks it’s goopy again. I had it checked out a while back and it wasn’t anything but goopy ear. However, the goop is runny now and she paws at her ear so time for another checkup.

Have you noticed that the climax of this issue is on a Friday going into a weekend? Why do my cats only get sick on holidays and weekends? (Rhetorical question.) Unless it elevates to an emergency, we’re humping it out until Monday. She’s eating and pooping, both good signs.

Vet trips always disrupt the “zen” of the house. One cat gets singled out. They are whisked away for a few hours and if we’re lucky, they come home. The rest are very cautious, peering around doorways and hiding behind furniture. If they are not cautious, it could happen to them.

Morgan is giving Gracie some advice on how to win over the vet techs.

The only cat that doesn’t seem to mind is Morgan but then again, she’s the perfect cat. When she broke her leg and was in a splint for eleven weeks, she cheerfully went to the Vet each week to get wrapped. She enjoyed the attention. They put ducks and whales on her splint wrap. There was no singing the songs of her people. No hiding under the furniture. Just a “let’s get this done” attitude. 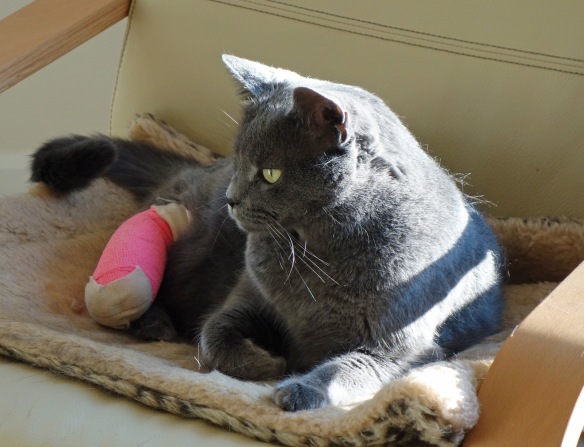 Morgan and her splint from last year.

Sasha, on the other hand, can make you nuts. She sings four-part melodies of songs never heard before at the top of her lungs. They sound like death dirges. She could win an Oscar for her “don’t touch me” performance.

Gus can be trickier to crate but he’s good with other people. Even people who wear white coats. He has a set of lungs though. Big ones. Not a fan of car rides.

I groomed Gracie with her favorite thingie and she’s happy right now.  Mellow. I almost feel guilty but she’ll feel better once the ear thing is resolved.

In the meantime, Gus and Sasha are very happy the large portal to hell isn’t out.

Happy weekend to all with no ear problems.