If you haven’t been following, Morgan broke her leg 3 weeks ago and has to wear a splint. We did away with the cone after a few days. She’s a great cat and doesn’t chew on her bandage so it’s not needed. For the first week, I kept her in a bedroom to slow down her movement. Nothing high to jump on as I removed the cat tower.

The second week I let her out to roam the upstairs for several hours every day. Still not much to jump on except for beds and our beds are low. In order to keep her confined to the upstairs, I used gates at the top of the stairs. That restricted all the cats from their usual (and as they say their constitutional right) travels throughout the whole house.

This past week I’ve let her come downstairs for the afternoon. She comes down after her long morning nap and returns upstairs for dinner and another big snooze. I keep her in her bedroom overnight mostly so I don’t worry.

Gus: Don’t worry Morgan. We’ll get you out. I’ll get Sasha.

While Morgan has been philosophical about the whole thing, the other cats are greatly annoyed with the gates. They are always on the wrong side. If they are on the downstairs side, they want to be upstairs and vice versa. *bangs head on table*

Sasha: How does this ding dang thing open? I need opposable thumbs! 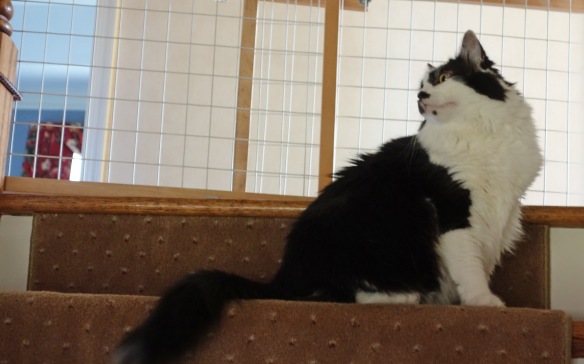 Sasha: I figured it out! We’re coming Morgan!

Sasha, the notorious ringleader of the revolutionary movement, decided this was totally unacceptable. She found that she could wiggle it open just enough to get through so I had to adjust. At this point she rounded up the troops and laid siege to the gates. In a planned movement they all advanced the gate knocking it down despite 87 bungie cords holding it in place. Morgan was happy that they got her released although she was busy munching on cat grass at the time.

Morgan had another rewrap today, hopefully her last. We discussed appropriate life choices (like staying off cat trees and other high places) and whether she should have complete freedom. It seems more important that she be free to the other cats than to Morgan. In fact, I think she has enjoyed the separation from the pesky Sasha who views herself as a shaman of some sort. She likes to have her magic paw touching Morgan at all times to push through energy. Morgan gives her stinkeye but Sasha is immune to that. Hopefully the human peeps can live through one more week of this continuing saga.

This is the closest Morgan likes Sasha. In fact if she was on a bed in another room that would be even better!

75 thoughts on “Sassy cats — The storming of the Bastille”