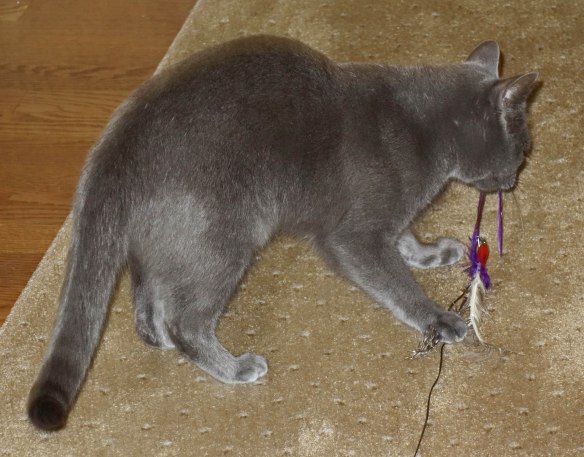 Gracie has been with us since January 2017. She was rescued from a hoarding situation and no one knew how old she was. She was small (under 6 pounds) but she was pregnant when surrendered. Based on her teeth, my vet thought 2 to 4 years old. The rescue thought 1 to 2 years old. Based on her activity level I thought around a year.

We have a feather on a stick. It’s one of the few “bought” toys the cats will play with. It’s gone through Hazel and Morgan. It wasn’t Mollie’s favorite.

Many of the feathers are long gone with a small chewed stump remaining. Every cat went insane for months to years before moving on. In recent weeks Gracie is moving on. 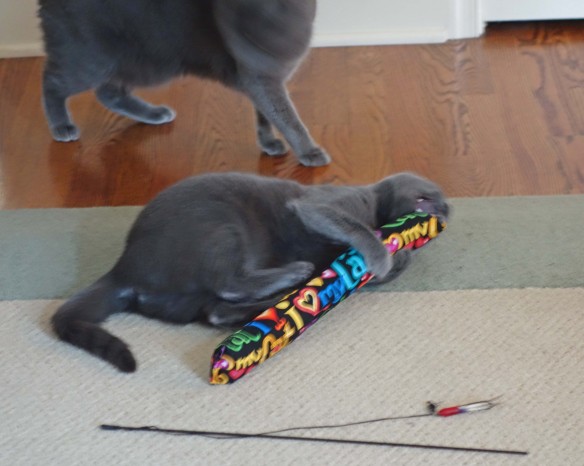 Gracie is bunny kicking her toy but the feather is waiting for her.

Whenever I sat down to eat (no matter which meal) she brought the feather for me to play. She was loudly insistent if I didn’t. I had more than one meal disrupted with a howling cat or my feeble attempts to wiggle the feather while managing a fork.

Over the past month she doesn’t bring it anymore. If I jiggle it, she will play for a little while but she won’t fetch it. That was her favorite thing. She took the feather up the steps, down the steps and into the screened porch. It was her constant friend.

Now napping is her constant friend. It happens. It happened to Hazel and to Morgan. I miss the old Gracie!