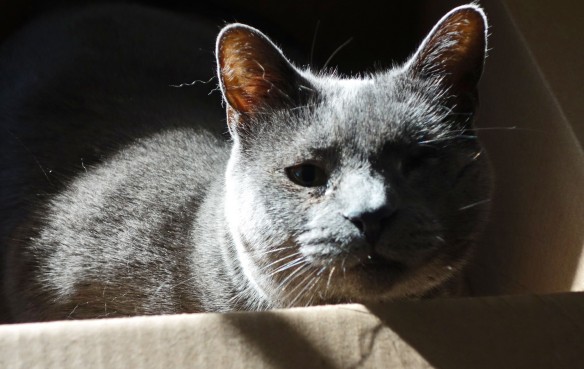 Every family has one. The kid who pushes the envelope. Yells na-na-na-na-na when they did something they shouldn’t. Makes you angry and laugh at the same time. Gracie is our wild child.

We weren’t looking to adopt (we rarely are) but we saw a small sad one-eyed gray cat up for adoption in the paper. She looked a little like Morgan and our hearts melted. Morgan had such a positive impact. We adopted Gracie thinking we’d get a similar package.

Ha! They are both gray and one-eyed and that’s where the similarities ends. Her first few months were full of vet trips. She came from a hoarding situation and had health issues. Cha-ching, cha-ching.

She was testy. Didn’t like to be touched too much. It was her bad teeth. After dental surgery she was a changed cat but not at all laid back. She had crystals in her urine and needed to take a horse-sized pill (which she refused) and eat wet cat food. I bought every brand, flavor, etc. trying to find something she liked. Sometimes she liked it for a day, then never again.

I made chicken for her. That was good for a while. Then she settled on something for a few months. One day she was done with it.

We are past the honeymoon period. I put food down. If she doesn’t eat it, she has kibble. 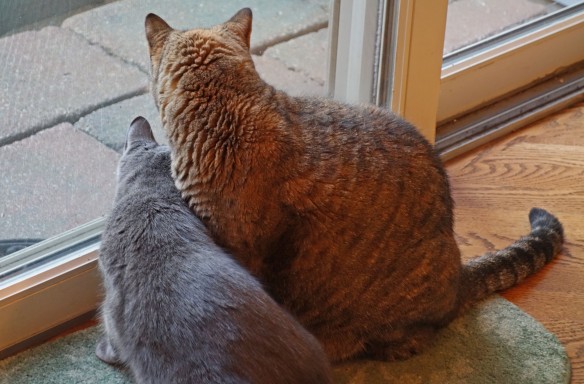 Hazel you are indaway! Move!

The things that endear her to us and make us laugh are many. There are a few frustrations like the food choices. Fortunately the other cats put up with her and that’s saying a lot. (I swear I’ve seen the other three cats look up how to return a cat to a shelter on the internet!)

All the cats in this house (except Gracie) are polite. If a cat is at a food or water dish that they want to eat from, they wait until the cat is done. Gracie will slowly stick out her paw and pull the dish out from under the eating cat. #notnice

She wants to play when it’s inconvenient, especially when we are eating. As quiet as Morgan is, Gracie is the opposite. Whine, whine, whine. She will come with her feather on a stick and holler while I’m having a “peaceful” dinner. #nowwannaplaynow

Where is the human! I wanna play!

She circles my feet at feeding time letting me know how long it takes. As soon as I put it down, she makes a dive for the litter box. This puts the food at risk as I have a Hoover cat Hazel willing to clean up anything. I tell her to “go potty” but it hasn’t done much good so I have to stand guard. #gottapeegottapee

She chases all bugs – real and imaginary. Her vision isn’t as good as Morgan’s. Maybe she lost her dominant eye. Sometimes she sees things that aren’t there. Or maybe she’s a visionary. #gottagetit!

This centerpiece will be on the floor shortly.

This is THAT cat that pushes everything off a horizontal surface. Both Morgan and Hazel will sit next to things. Gracie gets rid of them. #indaway

When she jumps on you she aims for “special spots.” She lands on my boobs, bladder or my belly. All eight pounds of solid buckshot! Ouch! (Three a.m. is her favorite time for launching.) #I’mherearen’tyouhappy?

There are three large water dishes in this house at all times. If the one she likes best somehow is empty, instead of going to one of the others, she makes a scene. She takes the dish and puts it in the middle of the room (so I can see how inept I am). She does all this with a lot of clanking noise. #dyingofthirst

We don’t know how old she is. The former owners said she had some litters although with so many cats in their home, I doubt they knew for sure. She was pregnant when surrendered but the kittens were aborted. She was too small to carry and couldn’t deliver safely. Her bad teeth (which could be from malnutrition) say she’s older but her actions say she’s between 2 and 3.

With Gracie facts don’t matter. Whether she’s 2 or 6 is irrelevant to her. You roll with it and wait to see what new (goofy) thing she will do today. 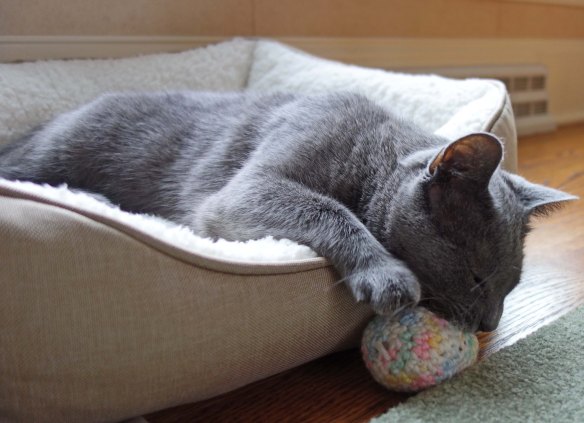 Gracie, after dental surgery, with her toothfairy gift!