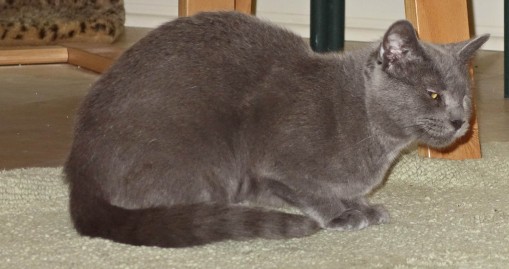 When Morgan was adopted she came with some intestinal issues that required pills. She was mixed with the other cats before we received her diagnosis and ALL the cats had to be pilled. It was a nightmare. Four cats, three pills a day. I wrote about it here.

This time around I was very careful. Gracie was not allowed out of solitary confinement until her stool sample results came in. She was clean.

She had bloody urine with crystals but no infection. Her urine Ph was off and the fastest way to drop the Ph was with pills. Large pills. Foul tasting pills.

The pills were as big as a Frisbee. They had to be broken in half, each half given twice a day.

During my last go round, I became efficient at pilling a cat. You have to be quick and focused. Scoop them up, tilt the head back and pop the pill in, all done in less than 5 seconds works best.

Nope. Didn’t work. I tried buttering it up so it would go down fast. Nope.

I tried a pill plunger. The pill was too big.

I tried with my fingers. That was a dumb move. I had a very sizeable bite on my index finger that almost required surgery or amputation.

Tasty pill pockets? She tried to bury those.

(You do remember that she’s a 7 lb. little squirt, right? I wouldn’t want to tussle with her in a back alley.)

I called the vet. She suggested the liquid form. I hate liquids. Cats have a technique of foaming it out. Any medication you get in comes out in clouds of foam that coat the entire room.

There wasn’t another alternative. I asked about compounding, pastes, injections, etc.

Before I spent any more money on Gracie, I decided to let the vet tech do the first dose.

I packed little Miss Trouble in the carrier and off we went.

The vet tech looked at her (very small and sweet), checked her for nails (yes, she has them). She then approached her from the back and crouched her in. She got a quarter dose in her before devil cat went berserk. Less than a quarter teaspoon of medication resulted in enough foam to put out a massive forest fire. Cat was located in the far corner of the room. Tech looked like she had been through a wind tunnel.

Gracie could not be given this particular medication. The rescue group told me that she had been successfully pilled while in their care. We concluded that the pill must have been too large and vile tasting. Bitter. Bad. Yucky.

Within a day her issues subsided. She’s eating normally and hasn’t bitten anyone since. She’s a happy little camper now. I still have the spot on my finger where she bit me.

I hope she never gets sick.

Each cat has their story. 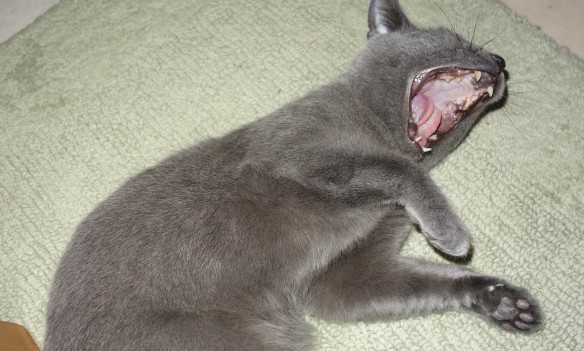