How many times did you say that when you were a kid? Especially right after you did something you shouldn’t have.

It was the first phrase I learned. Right after Mommy and Daddy.

It never worked for me. I tried it in grade school but teachers were immune. Back then teachers had the power. If I dared to tell Mom, I’d be in bigger trouble. Those were tough times to grow up. No one sued anyone.

As an adult I still use the phrase but only when it’s true. Like when a stack of cans falls over in a grocery aisle. It definitely wasn’t me. Or the lady’s room stinks. Nope, not me either.

My husband uses it. That’s when it’s helpful to have pets. They take the blame when no one else did it. Things like someone forget to turn out lights. (For heaven’s sake, those cats should turn the lights out when they leave a room!) Or leave a door unlocked.

There is one area that I was starting to think it was me. (Yes, I know so hard to believe.) My pictures stink. You’ve seen them. They are slightly blurry or out of focus or washed out. I routinely use Photoshop just to jack up the mid-tones and adjust the lighting.

I blamed the cats. One was black. Everyone knows that photographing a black cat is like snapping a big hole. Sometimes the only way you know which end you got was to see how many shiny spots there are. Two spots means the front end and one spot means the back-end.

Morgan, the youngest was too quick. She blurred everything.

All this came to a halt after the beloved husband got a new camera. His old one took great pictures but it’s one of those fancy Nikon’s that weighs 80 lbs. I rarely use it. He bought a “pocket camera” with automatic features. It’s similar to mine but takes much better pictures.

After I used it, I knew that it wasn’t me or my cats that were the problem. My eight-year old camera was washing out my shots. Technically the auto feature was snapping them at a slow speed (or so I was told). Neither I nor my cats are steady any longer than a New York nanosecond.

A trip to our camera shop yielded no significant improvement. They made a few tweaks. The speed was faster. The shots are less blurry but still washed out.

A new camera was the answer until I priced them Holy smolies! Using the beloved husband’s turned out to be the more economical solution. (I like cheap solutions especially when it means confiscating someone else’s stuff.)

Here is a photo from the new camera. 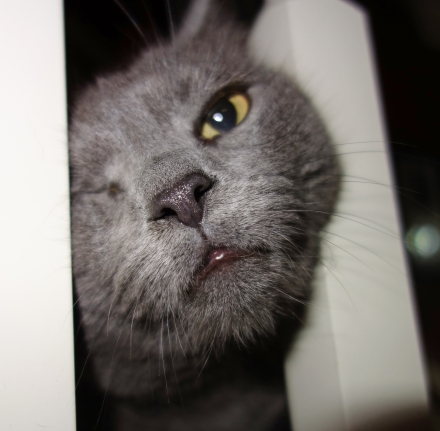 Morgan peeking through the stair banisters.

Maybe I can try this on people!