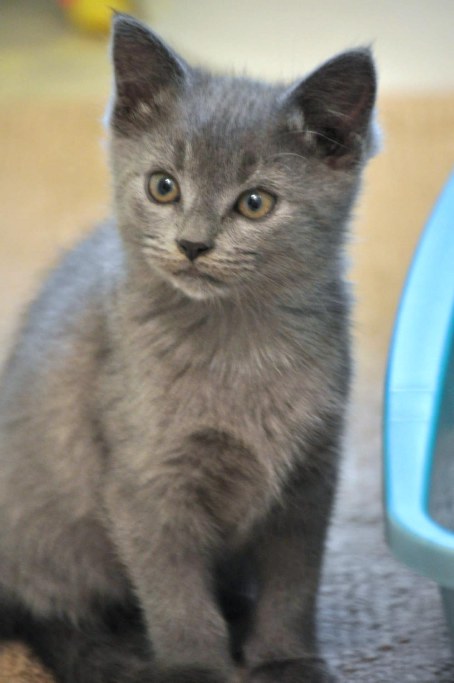 I couldn’t find any pictures but here is one that looks very similar. Source is an unnamed cat rescuer. Picture is from a shelter archive.

Look at that face. Could you close your door on him? He didn’t even have his mom!

About five years ago, on a warm summer evening the beloved husband said that our cat Hazel got out. He saw a greyish cat scampering around the patio. Hazel was sitting on a kitchen chair so I went out to see who was out there.

A cat ran under a bush. I couldn’t really see much so I went to the bush and talked very quietly in my “come hither cat voice” and the cat came out happy to find a new friend.

Turns out it was a very young kitten maybe two to three months old and all grey a lot like Morgan but without the Siamese features.

He was people friendly and very affectionate. He wanted to be held and cuddled and of course fed. I brought him inside. (He saw the SUCKER sign on my forehead and heard I had Friskies in my cupboard!)

I felt sure that he belonged to someone. A cat doesn’t get that friendly in a feral colony. The next morning I plastered “found posters” all over the neighborhood. No one claimed him. Since I already had three cats, I wanted to find him a deserving home so I sent out emails to all my cat friends.

Because of the possibility of disease I had to keep him segregated from my cats until I could get him to the vet for tests. The tests were clear and my cats liked him right away. There was no hissing, just some motherly sniffing and licks. Yes, even Jake liked him.

He was with me for three days when one of my friends called to say she found someone who wanted to adopt a cat. They came over later that day and loved him. (What’s not to love?)

I missed the little guy and sometimes I think I rescued Morgan to make up for it. Their personalities are very similar. Maybe the traits go with the coloring or maybe I’ve been lucky. And this is why I don’t foster cats. They come in the front door and would never leave again.

45 thoughts on “Sassy cats – The stray that almost stayed”