“I have a stripe-y tail, a stinky pooter and like my main staff person, I prefer cats to people. My name is Hazel.”

That says it all. She’s not exactly shy but more cautious. She knows what she wants and is tenacious even when her girth makes it difficult. Back to the beginning. 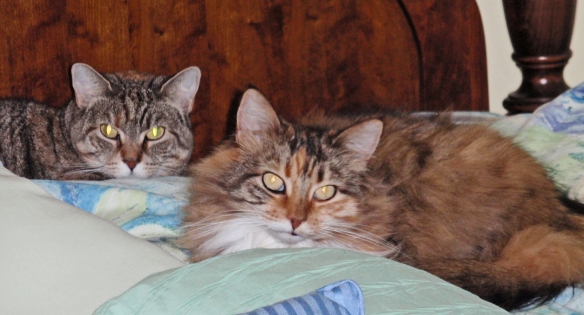 Hazel and Mollie canoodling on the bed

We had Jake, who was around 6 and had just adopted Mollie at almost 2 years old (all cats). Mollie was very active and needed a pet closer to her age. Jake was bellyaching about stealing his toys and jumping on his tail. (Technically Hazel is Mollie’s pet but I can’t get her to ante up for the vet bills!) 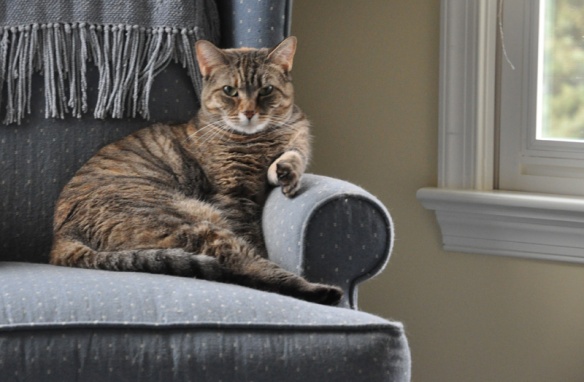 Hazel very regal looking. This shot was when she was very young. She does not look like the pitiful cat trying to hide in the carrier.

At an adoption event there was a pitiful cat trying to hide in her carrier. You could hardly see her. Obviously she wasn’t going to get a home acting like that. Enter cat person with “sucker” across her forehead.

She won the lottery and came home with me that day. They were grateful someone took her. She had been going to adoption events for three months. No one was interested.

She prefers tuna bars and chipmunk concerts to sitting in a cage while people look her over like cattle. Very undignified (so she says).

That is how Hazel came here to the “home of hard to adopt” cats. She wasn’t all that fond of people but Jake loved her and she became fast friends with Mollie. Mollie was the only one who could get her to come out from under the bed. Well…Mollie and tuna. (If you notice a theme here, Hazel is definitely a food motivated cat.)

She had been turned in as part of an outdoor litter. Her foster mom didn’t have room so she put her in a large garage cage with ten adult cats. (Yes, they all got along but there was no one to socialize her). The window to socialize a kitten is pretty short. By the time we got her at a year old, she wasn’t having all the touchy-huggy stuff. She still rolls her eyes when I come loaded with hugs.

She accepts the humans who live here (and feed her) as long as they don’t get too close or smooshy. Occasionally she will climb next to me for pets but that’s rare. Pets are rationed. One pet too many and she will be annoyed and depart at great speed as if the devil were after her.

She loves lounging on windowsills when the window is open. She was here about six months when the screen gave out and she flew out a second story window. The beloved husband was in the screened porch drinking coffee when he saw her exit. I was in the bathroom getting dressed. I didn’t so much see it as hear the screen release.

By the time I got downstairs, she was waiting to come back in. The lilac bush had broken her fall and except for a slight sprain, she was fine. She went right back upstairs and onto that window sill again.

Cats, especially in multiple cat households, do not do diets well. There is a “behind the backs of humans” noshing and sharing that’s difficult to stop. We work with it.

She has her ups (at 18 pounds) and downs (at 14 pounds which is where she is now). At 12 years old she is not an active cat but loves to monitor the wildlife from a nice cushy chair in the screened porch.

She loves the dining room table, windowsills, food, catnip, and cat TV (looking out the sliding doors). She will get along with any other cat although I’ve seen her bitch-slap Gracie. (Gracie deserved it!) She’s never the alpha but the letter at the other end of the Greek alphabet.

She’s easy and accommodating (as long as there is no pet carrier in sight). Pet carriers require her to remain unreachable under a king sized bed until it’s been put away.

Each pet in a household has a role. Hazel’s role is the peacemaker. And bitch-slapper.

Hazel says you should consider adopting a pet that may not do so well at an adoption event. If you want a really cute pet, adopt two.

66 thoughts on “Sassy cats – The book of Hazel”