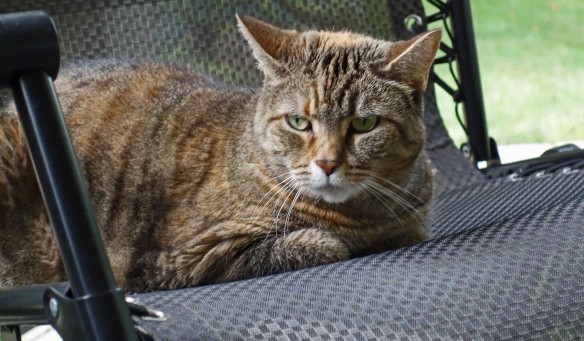 Hazel before the traumatic (for both of us) dental surgery.

When it comes to a crisis I’m stronger than most. I know what needs to be done and have the guts to do it.

Unless it involves my cats. Then I am a weenie. The queen of weenies.

At a routine exam last winter my two older cats, Mollie and Hazel, showed signs of advanced gingivitis. They had bad teeth (and the accompanying bad breath). They both needed a thorough cleaning with possible extractions.

That would mean anesthesia. Mollie went in first during the winter because it was thought that her teeth were worse. It was very traumatic for both of us. She doesn’t do anesthesia well. She’s seven pounds. Far too little.

It took her five days (and two frantic calls to the vet) to fully recover. It took me ten days plus some added time after I got my credit card statement.

The plan was that Hazel would go in at the end of February. That turned to March, then April. Finally in May I called for an appointment and she went in last week.

Hazel is my plain vanilla cat. (Really that’s a positive statement.) That means she’s mellow, not overly friendly but no hissing or biting. She was part of a semi-feral outside litter and never socialized as a kitten. As a result, life is on her terms. I can’t just pick her up. I have to plot and plan.

The best time to pick her up and put her in the carrier is when I put her breakfast down. Sometimes.

She can smell fear on me. As hard as I try to be nonchalant about it, she can tell. I exude fear like a pheromone on a bodacious woman in heat.

In order to get her to the vet, I had to corner her in a room (unfortunately it was my bedroom with a king bed) and use a broomstick handle to get her out. Not a good start.

She did well with the surgery although she had four extractions (two more than Mollie) and two were listed as complicated. I’m not sure what that means but it can’t be good.

All this required two Starbucks mocha lattes for me. Hazel wasn’t allowed to eat but she doesn’t like Starbucks anyway.

Once home her jaw was sore. She did what any self-respecting cat would do. She hid. I had to give her pain meds. That required the “broomstick under the bed” approach until day two when I decided the treatment was more traumatic than the sore jaw.

She didn’t eat until she got out of the “confinement room.” (Don’t feel sorry for her. It’s a bedroom with two sunny windows and everything she needed at floor level).

Then she ate sporadically. Anything she wanted. (Ok, at this point I am so remorseful that if she wanted a 60” TV she would have gotten one!)

At the end of five days she somehow gained a pound. With very little eating!

Long time readers may remember that Hazel was put on a diet two years ago and painfully (for me) lost four pounds. Now I had to restrict her food again.

There is good news. Hazel is back to normal (but a little pudgy) and purring. Mollie doesn’t have any bad breath. Morgan has wonderful teeth and won’t need any work for many years.

That is enough time for both me and my credit card to recover.