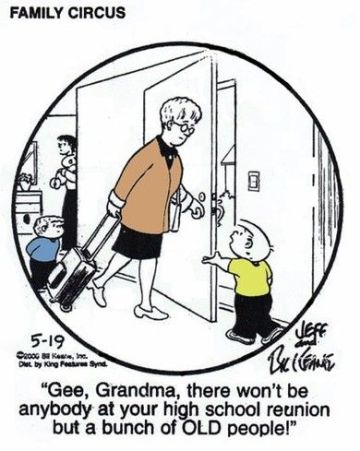 Reunion wrap-up – I didn’t go but I watched for the Facebook photos. They were posted last week. They had a good turnout considering the age of everyone but less than last time. Out of about 30 classmates I initially recognized five. I played with the photos, enlarging so I could read the name tags. Sometimes that was successful and sometime it was too blurry. None of my high school friends attended so had I gone, I wouldn’t have “caught up” with them. I may have made new friends. Or not.

An “aha” moment – I am living close to the town where I grew up. I’ve often wondered why I never ran into people from high school. That mystery is solved. I wouldn’t have recognized them. Especially the men, they looked so different. Even with name tags clearly identifying them, I had to look hard for the old recognizable features. I rarely found it. Weight and baldness (or white hair) can do that. Some people seemed to morph into someone totally different.

One good moment – I found a guy I had a crush on in my senior year. He liked someone else and nothing worked out for either of us. After I read his name tag, I recognized him. He has aged but he looks very similar with a full head of hair and the same slim build. I know how to pick them even when it doesn’t work out.

The class reunion is done for another five years. Enough time for the curiosity to burble up. Until then…

63 thoughts on “The class reunion – the end of the story!”