Another one bites the dirt – Queen said it so well! For the past month I have been thinking of any old friend who I haven’t seen in decades. Periodically he wrote restaurant reviews and I was on the email list. I hadn’t heard from him in a long time. The day I decided to email him, his obituary was in the newspaper. He died after Thanksgiving at about the time I started thinking about him. He was 86 and didn’t have close family. His wife is in a home with dementia. I’m not sure who will be overseeing her care.

Stepping up – I contacted another former co-worker when I saw the obit. He had more recent connections with him. He knew he was ill. When he heard the end was near, he refused to let him die alone. He stayed with him in the hospital until he died. I found out that there is an organization called “No One Dies Alone” made up of volunteers who will sit with someone until they pass. My heart was warmed that there are people who truly care about people who are leaving life without family.

Addictions – Everyone has weaknesses. I’m not a candy or super sweet person but I love salt (with grease or fat coming in second). A neighbor introduced me to dark russet potato chips. My Mom would call them burnt but they are just darkly browned. I think I need meetings.

Is it ever too much? – Through a series of unrelated events, our family room is littered with cat stuff. I bought a new cat bed to put in the dining room for Hazel but right now it’s in front of the fireplace where Morgan likes to toast herself. Chewy sent an extra cat bed so the extra is there too along with catnip bags, a very large stuffed rat (every time I think I can get rid of that Gracie wrestles with it), a feather on a stick and a few other items that completely eliminate us from any House Beautiful tour. The beloved husband announced that there is too much cat stuff sitting around. Sadly, he is right. I have to find proper homes for all the beds and get a basket to house the toys. The cats think it’s perfect the way it is. Maybe it could use a hairball on the carpet. 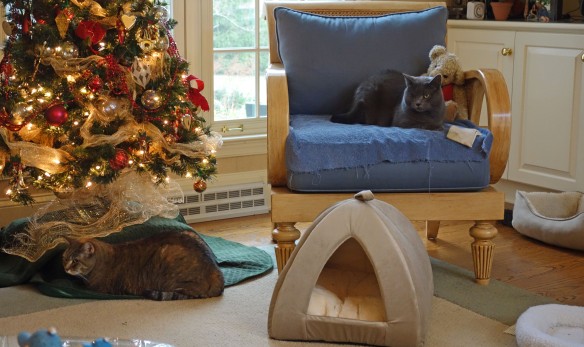 Please note there are three cat beds unused. Hazel is on the tree skirt and Morgan in on a chair.

An ending or a beginning? – This is the last post for 2018. It’s been one helluva year. I spent too much time whining about the weather which was too hot or too cold but mostly too rainy. We lost some friends this year reminding us of our own mortality. More of our friends are retiring or at least setting short-term time frames. The granddaughters turned 13 which means they are equal to age 30 in teen terms. For me the New Year brings promise. I’m hoping for health and happiness for our friends (and all of you in the blogging world), maybe a lottery win (not necessary for happiness really) and more stable weather (that would make a more stable Kate). Happy New Year to you all!