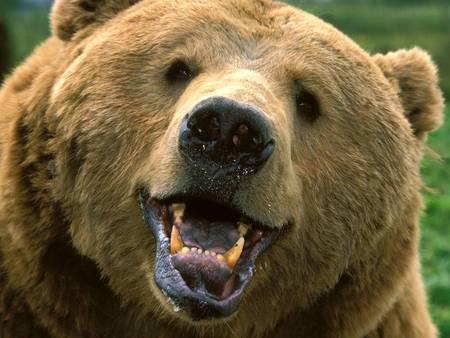 “Sometimes you eat the bear and sometimes the bear eats you”

Today was one of those days. Hot and muggy in the northeast but pleasantly summer.

There was routine stuff to do — follow-up doctor appointment; move dying plant; break up frog fights (seriously there is too much testosterone in that pond!).

At the doctor’s appointment with my “face” nurse, she zapped (for the second time) two red spots I had on my face. She said, “I don’t like the way they’re flaking. This could be precancerous.” She gave them another zap (ouch!) for good measure and told me to come back in a month for a look-see. It wasn’t an optional return as in “come back if it doesn’t improve.” It was “come back I want to see it no matter what you think.”

I am not overly concerned about it. I am the Queen of Denial (unless I’m in the middle of an attack of hypochondria). Despite having cancer before, I don’t think I have it now. I never do. However, it did rattle my brain just a little.

The other (much more logical) reason is that many people my age (which is not old) get pre-cancerous spots which respond to zapping. The beloved husband has boogers taken off his face and body every year.

Perhaps the scarier thing was that the first zap didn’t work. (Still not worried.)

The second call was the worst (although still not fatal). My recent bone density test shows less density than last time. The doc wants me back on those nasty bone-building drugs.

Anyone who has been on estrogen-repressing drugs is at risk or has osteoporosis. There are a number of drugs that help to stabilize your bones. I have been on most of the oral ones. They all make me sick.

I was pleased after the drug treatment phase was over that I could take a “drug holiday” from all of them. Looks like my holiday is over. Goodbye Paris! (Oops! I forgot to go there!)

It’s a few weeks until my appointment so I have time to research and investigate and interrogate.

First up — what is covered by insurance and what are the costs? Yikes! Not all of them and expensive are the answers. (Why am I not surprised?)

I have a month to weed through the treatments, cost them out and search the brains of anyone I know who takes them.

The good news? I already do all the other stuff to protect my bones. The bad news? It wasn’t enough.

Mom always said things come in threes so I am anxiously awaiting the third piece of bad news. Hope it’s not the frogs.

Here they are later in the day after the wine and Barry White music.

A little to the right. Yes, that’s the spot!

50 thoughts on “Dodging the bear”