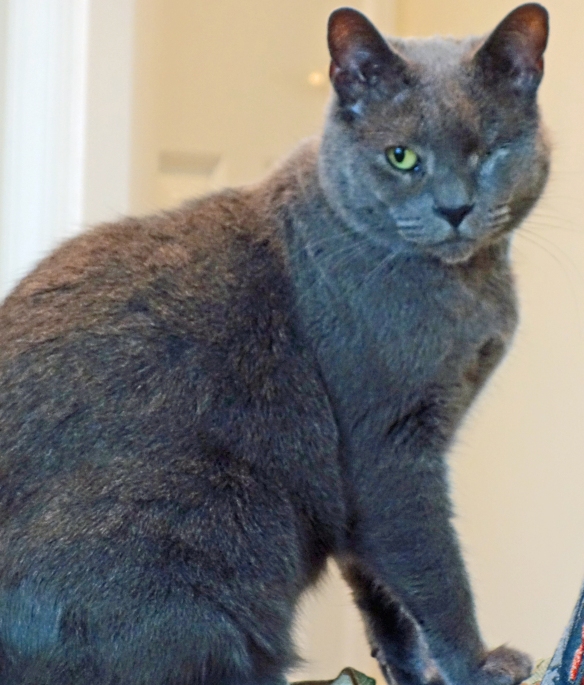 Gracie: I absolutely did not put my cat blankie in the wash making everything else full of cat hair!

The beloved husband and I were driving behind someone who would repeatedly slow down and speed up for no apparent (to us) reason. I said, “they must be texting or on their phone.” We always make up a story if one is not apparent. Then I remembered my own car accident.

There may be some truth to that but not in this case. I was tooling along, perfectly alert, when my brakes gave out unexpectedly. Not that you ever expect that but it’s a shock when they do. I remember the split-second thinking and how that didn’t work out.

There was no cell phone, texting or anything going on. I wasn’t even singing to the radio! Just mechanical failure yet I’m sure people driving by thought it was another case of a distracted driver getting what they deserved.

The whole episode has made me more sensitive to filling in the blanks, jumping to a conclusion, blaming it on something I know nothing about. How many times do we do that?

A long time ago I was in a car with a friend driving on the interstate. It was a complicated exit with lanes going to different roads. Everyone was driving too fast. My friend was so angry as someone in front was driving down the center of two lanes. No one could pass. It was obvious to me that they weren’t sure which lane to take. Out of state license plates were a clue but my driver friend missed that. After some cussing, I pointed out the obvious just as the driver chose a lane.

How many times in life do we forget to look for the small signs like an out of state plate, that would help us to understand? Far too often.

Editor’s note: We blame the cats for most things that happen in this house and it works for us!

53 thoughts on “Jumping to conclusions”