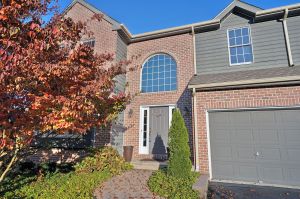 This is the new house! Most of the living area including the main bedroom is on the first floor.

Some excitement – We have been going over to the new house almost every day. We have met all the adjacent neighbors. All seem nice. No spidey sense alarms went off. The next door neighbor has a delightful dog that came over to greet us. She’s a beigy-white poodly mix of some sort. Smallish but she is a flirt, coming around with a wiggly tail but not quite wanting to be petted. Someone told her we live with cats. She’s deciding if she approves of more cats in the hood.

More people working from home? – The spam on my computer email has kicked up considerably while the WordPress spam has not. The emails are for selling things like male enhancers. Seriously, know your customer. There were a few stating I won something if only I’d give my banking info so they could transfer it there. Nothing from the Nigerian prince.

Side effects of packing – As we are packing, walls are getting bare. It’s like living in a new home with no personality. I still have the ancestor pictures going up the stairs but that will come down shortly too. So sad. It’s almost as if we are stripping it down to the ghost of the house.

Will they or won’t they – The house buyers aren’t sure they will keep the pond. They have two young daughters and may prefer more yard or patio space. The local wildlife will miss it as it’s a drinking spot for many critters, especially in the winter. Our home is zoned for a zoo. When I moved here there were several ponds in the neighborhood. Most people have taken them out. At this point there is only one that I am aware of. Ponds are not a lot of work but they take some maintenance. People who rarely go outside or prefer to run in parks or on trails don’t want to do it. 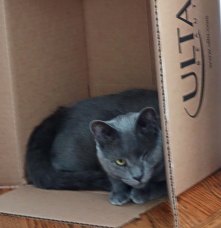 Boxes – Our cat Gracie loves the boxes and paper that is always out for packing. She will expect to have empty boxes in the new home as part of the décor. It’s her jam.