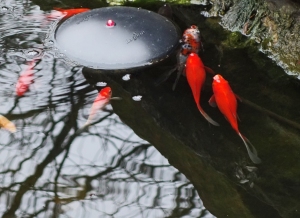 My de-icer with a few of the fish swarming. Sometimes it’s all orange with fish!

The Ides of March – Today is that day. Beware Julius Caesar! I feel the terror. Times be weird. Note to self: Check under togas for daggers. #dontgoout! #toopeopley

Spring came early – I still have my winter de-icer in the pond. It heats just a small area so the pond doesn’t freeze over and the gases can exchange. Keeps my fish alive. It’s a warm spot. The fish are out of their sluggish hibernation and hanging around this “spa spot.” So cute. The daffodils are also blooming. It’s all early but I’m not complaining! Something good has to offset the crazy. #pondlifeisgood

Odd things I saw – (I should make this a weekly thing because…well…people be weird and right now they are weirder than ever. I’ll try not to judge but no promises.) I was in Starbucks this week getting my fix to stave off the weirdness. My phone had died so I had to stand in line like the peasants. *bangs head on table* There were only two customers in front of me. One was a couple in their 20s. They both had on oddly fashioned face masks and winter knit gloves. They had difficulty ordering through the mask so it took forever. I wondered what the gloves were about. Knit has no barrier. Latex would have been much safer. The masks had side gaps so how effective is that? Why would anyone dress like that (at this point there are no cases in our area)? Perhaps they have an autoimmune disorder or live with an elderly grandparent. In that case why not use the drive-through. The clincher came when despite all their precautions, they used dirty money to pay. (All money is dirty! Have you ever seen people lick their fingers when they count it?) Inserting a chip card in a machine requires no touching. #whathappenedtocommonsense?

So I thought that was odd – Early this morning I went to the grocery store to pick up a couple of items. It was mobbed at 7 a.m. Many items were sold out. In the checkout I was behind an older man with knit gloves. What’s with the knit gloves? Am I missing something? He was very pleasant and insisted that I go ahead of him although he only had one more item than me. Maybe he thought I was “germy.”  Whatev! #worksforme #iusehandsanitizer

Housebound – Our governor has closed schools for at least two weeks. He also asked that unnecessary public places close or restrict their hours. He is even closing the state owned liquor stores! Yikes! As I listen to people, I’m not sure they understand the concept of social distancing. Some are using this “vacation” as a time to “do stuff.” People can’t stand to stay home. Are they not comfortable with themselves? Or are they neurotic “doers.” When I get cabin fever, I walk. It’s not very social but I just love my own company. Never had an argument although the discussions get lively! #myownbestfriend #catsmakemoresense