There was a time when this house was a shelter for kitchen gadgets much like it is for slightly crazed cats. They came from the store to seek refuge in my pantry, many of them rarely used. Some left to visit friends, never to return.

These days I’m pretty good at passing by new kitchen gadgets. There is no air fryer, rice cooker, soda machine or spiralizer here. In the past there was a bread maker and an ice cream machine. I bought an immersion blender and an electric knife sharpener. Some are winners like the last two which gets used often.

Some are good at what they do but go unused like the bread maker and ice cream machine. (Those were rehomed!)

For the past year I have struggled with a yearning for a sous vide gizmo to make perfect meat. I questioned whether it was a passing fancy. 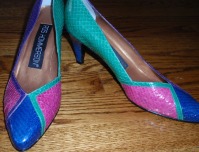 Yes, I bought and wore these shoes a few decades ago!

I have a great many passing fancies. Most involve oddly colored but beautiful shoes. Since retirement I have learned about restraint. I’ve also learned to live more simply. I don’t need stuff.

(For those not familiar, the sous vide cooking method is a hot water bath that cooks the meat to the perfect temperature and no higher. The gizmo itself circulates the water around your meat which is sealed in a plastic pouch. You sear the outside of the meat either on the range or a grill and your meat should be as perfect as any fine restaurant. The meat is never overcooked or tough.)

The raging hormones that control these impulse purchases come out during winter. It is encouraged by endless nighttime and low temperatures. What is there to do but dream and look at stuff on-line? These purchases fuel my fantasies.

I checked the reviews. My favorite was one that started by saying “be sure you want one.” This guy knew me. He must have known about all the gadgets I have tried over the years and never used again. His warning wasn’t enough.

I bought the damn sous vide. Technically, just like with my computer, I bought two and returned the first one when I realized that it’s controlled by a cell phone. Seriously? If I’m cooking I don’t need to do it through a cell phone.

So now what? I had to download recipes. I received a cookbook as a gift. I had the stuff I needed including a nice steak already in my possession so I was ready to try it.

That was yesterday. As with many things (that will go unnamed) the first time is always full of fumbles. Where to do it. Should I put a hot pad underneath? Did I do it right? Are we gonna die? (Pizza place was on standby in case of a disaster.)

Dinner was good. As with everything else, I learned a few things that will make it better next time. Will this toy come out to play often? We’ll see. I’m not giving up my slow cooker. That is one kitchen gizmo I use often.