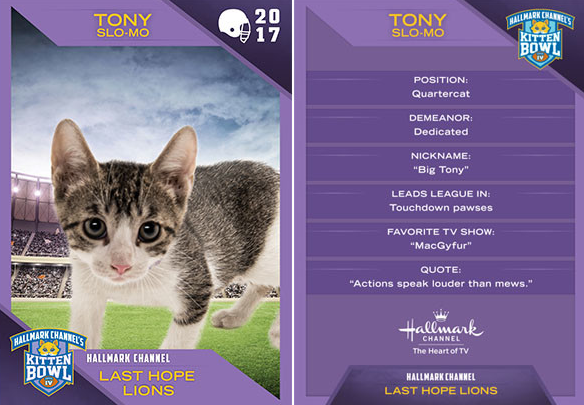 Better than Valium. Almost better than winning the lottery. So funny and peaceful in a ruckus sort of way.

Your heartstrings get tugged. That’s good for you. It’s almost like exercise. I bet you even use calories. (There are a lot of “almost’s” here. Some “not quite’s” too. On the whole, winning the lottery may be better than watching any TV.)

How can you not laugh at players with names like Noodle, Cupcake and Spuds McMuffin? Mr. Slippers was last year’s star. He was adopted and renamed Howard. (I mean seriously? Mr. Slippers to Howard? Sigh!)

There was also Puddles and Flea-on-ce. Frank and Beans (identical kitties). Tony Slo-Mo was the quarterback. (Are you smiling yet?)

There were about a hundred kittens at this function. Typically they all get adopted. Showcased in such a fun way, how can you not adopt them all? (Beloved husband hides the phone!)

Subaru was a sponsor (love their commercials) as were several companies that make or sell pet products.

Moving onto Puppy Bowl, I was introduced to Choe-kar-doggian, a delightful puppy. The puppies were a lot more ruckus and there was more size variable but just as awe inspiring.

The People Bowl was inspiring too or so I heard. I left after Lady Gaga.

How do you get your happy on?