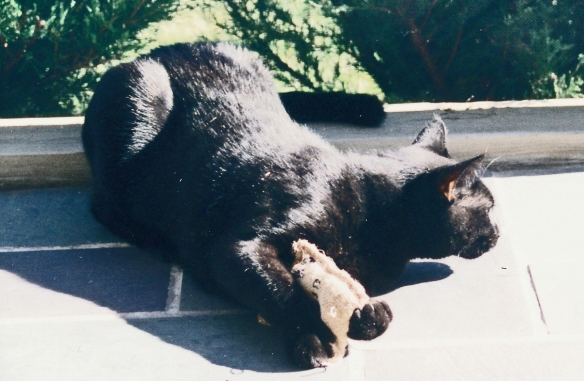 Some memories stay vivid longer than others. For my old cat Jake, the good (and funny) memories are brighter and the bad ones have faded. He was the topic of many blog stories and I’m posting one of my favorites. It was his last big caper that almost did me in. It happened on the day of my family reunion last year a month before his death.

Every reunion has its story. Sometimes it’s about people and sometimes not. This year it’s about my old cat Jake.

Jake is over 18 and that’s old for a cat. He is an indoor/outdoor cat but his outdoor time is very little and usually involves lying on the warm brick patio.

This past Sunday I was hosting my family reunion. That means I’m slightly (ok, maybe more than slightly) neurotic. Getting things ready. Do we have enough? (I don’t know why I ever worry about that!)

Jake went out after breakfast like he always does. He usually smells the perimeter bushes and if there was an offending critter that came in during the night, he will pee on the bush to re-establish territory. It’s exhausting work keeping the yard safe. Sometimes he can spend over an hour peeing on bushes with his old bladder.

Around noon I realized he never came back in. The plan was to keep the cats upstairs through the festivities. I had until 4 p.m. to find him and get him back inside.

I went walking his favorite spots around 2:30 p.m. but couldn’t find him. It’s ok. I have another hour and a half. Or so I thought.

My brother showed up an hour early with his family. It’s not a problem except there is no way Jake will come in. Strangers! Lots of them (anything more than one is lots)!

By the time everyone left it would be dark and he hadn’t eaten since breakfast (he’s diabetic) so I didn’t think it would be too hard to get him back in.

The last folks left before 9 p.m. A perimeter walk came up cat less. We cleaned up. Made sure all the food was put away. I walked the yard again. No Jake.

I walked the yard calling for him every half hour until midnight when my weary bones were exhausted so I went to sleep.

Since he hadn’t eaten and he only has three teeth (hard to gum something to death) I was afraid he’d be hungry. I left a small dish of dry cat food with some water in the screened porch which has a cat door. In a moment of brilliance I closed the door so he could only come in and couldn’t go back out. (Queue scary music here!)

At 3:30 a.m. (my first pee break) I decided to check the screen porch. I would let him back in if he was sleeping on the chair. There was a critter in the porch all right but it wasn’t Jake.

There was a raccoon happily dining on cat food. He was taking a nice long drink of water. He’s trapped on the porch because he can’t get out the cat door which is how he came in.

How do I know that? When he was done he went over to the cat door to get out. He acts like he’s done this before although we never leave food out there.

All day long the exterior people door to the screened porch would stick and would not close unless you pushed it. All I had to do was run around the back; push the door open; and run like hell back into the house.

By the time I got back to the house I heard the damn door slam shut. First time it did that all day.

So far the raccoon isn’t agitated although I thought about waking up the beloved husband in case I was attacked. In the end I thought it wise to let sleeping husbands sleep.

I took a long stick I use for the pond to push open the door again and jammed it between the door and the sash.

The damn door again closed but not all the way. There was a 2” opening. I wisely went inside the house to watch the raccoon through a nice safe window.

He calmly opened the door and scurried on his way delighted that he had such a great supper. He would have to tell his friends about this restaurant.

I called for Jake but chose not to walk the yard in case other critters were lurking but again no Jake.

I let him in. He was looking for the wait staff (that would be me) to open the restaurant and feed him. Not surprisingly, the other three cats showed up from nowhere. They must have heard that the cat diner opened early.

He slept the entire day except for a vet visit and he had no interest in going outside again.

I’ve said it before and I’ll say it again, I won’t have another cat that goes outdoors. When you invest yourself in a pet, the anguish runs too deep when they can’t be found.

This story had a good end. Most of the reunion stories do although some have surprise, tragedy or heartache along the way.

And that was the reunion story for 2015! 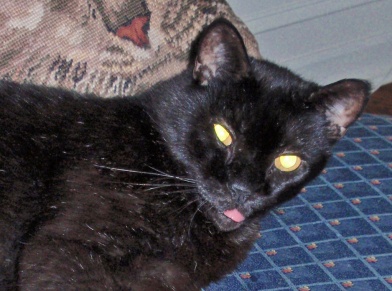 “Hey Cupcake! I need a tuna martini with a twist of catnip and make it snappy”