Size does count. Don’t let anyone tell you otherwise.

If you have read past posts, you already know that I have one indoor/outdoor cat and two indoor only cats. Jake, Mr. Indoor/Outdoor, wakes me up around 2 to 3 a.m. each morning to let him outside. This has been going on for years.

I have tried every trick in the book to get him to either sleep through the night inside or not go out at all. Nothing has worked. For those that say, “Just don’t let him out,” let me tell you that he will wake the dead with his howling. No one can sleep through it. I actually believe our neighbors can hear him.

Last Friday, I let him out at 3:30 a.m. About a half hour later I heard weird howling that definitely was not Jake. We do have foxes that will go after a cat. Down the steps I flew. I turned on the outdoor light and there was a….um…..coyote hovering in my azalea bed. At least I think it was. It was doglike but not a dog and as big as a German shepherd. Definitely not a fox but maybe a wolf. We live next to a wildlife preserve and there are a lot of critters there. He saw me at the door and took off. (That’s a good thing because it means he wasn’t sick.) 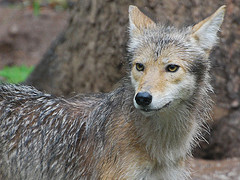 Of course, I assumed that poor Jake was cornered in the azalea bed and was hoping there were no bite marks or damage. I didn’t even get a chance to look there. He came around from the other side of the house as if the devil were after him.

He flew in the house, growled, yelled and carried on for five minutes. I couldn’t calm him down. So, I gave him some food; turned out the light; and went back to bed.

Now for the best part…he hasn’t gone out at night since. He takes a stroll after dinner to “mark” his territory. I don’t know where he gets so much urine! Then he comes in to watch his favorite TV shows (don’t ask, this cat definitely likes TV). He will settle in for the night. Sometimes around 4 a.m. or so, he will wake me up but it’s for old time’s sake and maybe a little catnip.

The coyote did what eight years of training didn’t accomplish! Size (and scary) does matter!

Many thanks go out to Jensinewall for nominating me for the Liebster  and Sunshine Awards. She lives in Dublin and has a wonderful blog with everyday stories that are always interesting.

Thanks also to TrishDM who also nominated me for the Sunshine Award. Trish is in med school in Canada. She writes about her experiences so it’s a little like Grey’s Anatomy only you know it’s really happening to someone.

Both blogs are well worth a visit!

20 thoughts on “The bigger the better | For Animal Lovers Only”