During the wonderful warm spring of my senior year, rubella (also known as German* measles) swept through my high school. This was before the measles vaccine. It is highly contagious and itchy. Some people get very sick. Really sick.

I was smug because I had them when I was young and “they said” you don’t get them twice. Well, “they” were wrong. Obviously my immunity wasn’t informed of that.

I had red splotches all over. Gross red splotches. In places you could see and those other places that are embarrassing to scratch. Even some lady parts.

It was right before the prom and graduation. School was fun at this point. All the important exams were done. There were all sorts of activities going on. Lots of celebrations.

My doctor “quarantined” me at home for five days. Rubella is bad for pregnant women especially in the early stages of pregnancy. Kids who were diagnosed were instructed to stay home.

My case was very mild. I was splotchy rather than ill so I could focus on self pity.  “Why me?” and “it’s so unfair!” I wailed in a loud voice. My mother was a saint. I would have slapped me silly. She just rolled her eyes even as I assured her that my life was over.

My behavior was embarrassing. I’ll blame it on that cotton candy pink prom gown I really wanted to wear! With pink dyed satin shoes.

I was fortunate. I recovered fast with no lingering side effects. I attended the prom, my graduation and way too many parties. I’ll still never forget that feeling of desolation. As silly as it sounds, it was soul sucking to think I spend twelve years working hard and wouldn’t get to enjoy the final fun part.

I’m not making light of the true victims and all the tireless people who are working 24/7 but I have a spot of empathy for the kids who are missing out too. Some of them don’t get it. I didn’t get it at their age. It was my mother who kept me grounded. Not everyone is lucky to have someone like her.

Author’s note: It’s called German measles because it was identified by German physicians as a separate disease from the common measles. Not because it originated in Germany. 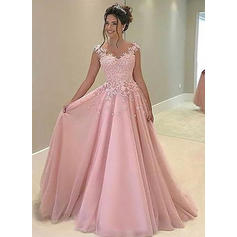 No, my dress wasn’t this pretty. Dresses at that time were more sleek and modest. This would be considered a “plunging” neckline compared to what I wore!