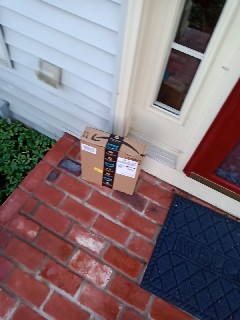 Pretty cool – For the holidays Amazon sent me a picture of my package on my front porch for proof of delivery. We haven’t had theft issues with porch pirates on my street. The houses are set back and it would be a more difficult grab and run than in other areas but this is still cool.

Should I save or should I throw — I have a 5-year-old Kindle Fire. I’ve been having trouble with the battery keeping its charge. The model I have is not made to swap out batteries. It’s not an easy process and after watching the YouTube numerous times, I decided it had a good run. I tried one more thing. I did a “hard” reboot. That’s when you hold down the power button for a period of time. Good grief! It’s like new! I always forget the power of rebooting. Now I have my extra Kindle back. This is the one I prefer to take for waiting rooms.

Targeted ads? – Really? For a few days this week every time I was on the internet, I was getting a disgusting picture of someone pulling out ear wax. It was an ad for something but I never looked at the product. I have not googled ear wax or anything near that. I’m hoping it goes away before I get nightmares.

Tracker – The only time I take my fitness tracker off is when I shower or charge it. I showered prior to a “large” errand run (large = step rich). I walked out the door without the tracker back on. As a type A person I debated if I should turn around (I was halfway to my first store). I didn’t but I was unhappy. I picked it up on the way to the second stop. When I zone in on something I’m like a baby with a nipple.

Stupid people – I regularly go through an intersection of a four lane and three lane road. On one corner is a Dunkin Donut. The entrance is three car lengths from the intersection. There are many times when a driver blocks up the whole caboodle. They can’t turn into the parking area because of on-coming traffic. It’s simple to drive a half block and turn around but they prefer to let the light turn red without any cars getting through. Seriously it’s a donut! (No, this is not like my tracker obsession! That affects no one but me.)