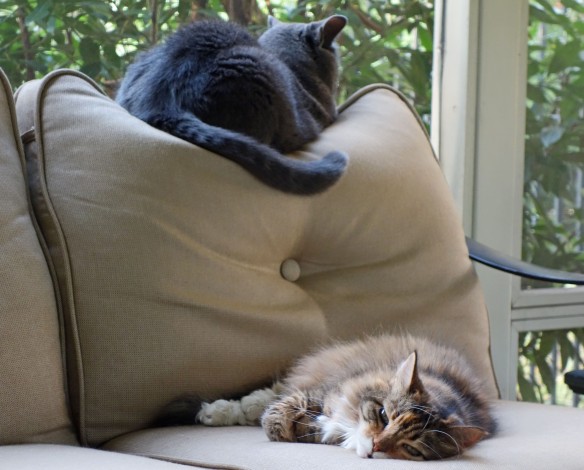 Mollie (on seat) and Morgan enjoying a gorgeous day on the porch. Mollie was just waking up from a nap!

After Mollie’s victory lap last week, we had a little setback. She received a steroid to help with her itching and it did help. Then I noticed that she had a gaggy thing going on. I didn’t know if it was breathing or swallowing although I though the latter. I also wasn’t sure if it was a drug reaction. It wasn’t. I hadn’t noticed it before but I was focused on her scratching.

My cats only have a health crises on weekends and holidays. I talked to my vet’s office Saturday morning but I didn’t have enough information. I needed to know if she eating and peeing.

I quarantined her from the other cats for 24 hours and she did eat a little, peed a lot in big balls so there was no bladder issue. Her weight dropped a half pound. I wasn’t sure if that was a normal fluctuation or a signal. By now it’s Sunday so it’s off to the emergency vet.

My vet had recommended a new one that just opened near us. I liked the vet I had and the place was new and clean. It wasn’t busy but there was that awful wait.

They were worried about a cardiac issue so they took an x-ray. The x-ray showed a normal heart (yay) but her esophagus was open. It should be closed except when food goes down, then it closes again. She also had gas pockets all over her GI system. She could be gulping air with the open esophagus. She could have reflux. Or it could be something else serious.

This is about the time where I got woozy. Words like biopsy and chemo were mentioned. Mollie is 15 and I have no intention of putting her through painful treatments. She’s had a great life and when it’s her time, I want her to go peacefully (which is what we all want).

At the end of the scary conversation, the vet gave me an antibiotic that will soothe her GI tract and help with the gas. I’ll go back to my vet if it doesn’t work. An ultrasound would be the next non-invasive test. We’ll see.

She’s been much more social and has been on the porch enjoying the weather. I’m taking this as a good sign. I am cranky when I have gas so maybe that’s been making her uncomfortable.

This was a wake-up call that my little Mollie is now an old cat. I don’t know how that happened. Incidents like this are nature’s way of sending me a message to prepare.

I’ve been nostalgic this past week but I’m looking forward to enjoying whatever time she has left whether it’s months or years.

If anyone has had any experience with pet ultrasounds, I’d sure like to hear.