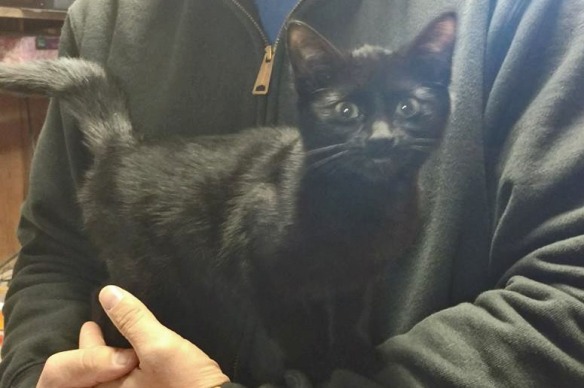 This bundle weighed about 2 pounds!

The background: I have quirks. (I know you are stunned!) I don’t like to see suffering and I’m partial to animals. I have a soft spot (some say it’s in my head but I think it’s in my heart). It’s especially strong for animals, babies and old people. Not so much for normal people (and I use the term normal loosely).

This week we went to our local feed store. They sell feed for farm animals. The draw is their birdseed prices which are especially good. I was stocking up for the winter. Those doggone birds with their outrageous parties can eat me out of my 401(k).

To say the place is rustic is being kind. It’s a barn. It’s always cold except when it’s hot. There is a small heater in the office/sales area but the storage area along with some of the retail sales shelving is not heated. The people are nice. They deal with country folks so everyone is neighborly.

I went to the counter and in a flash a black ball of fur climbed my arm, nestled on my shoulder and started to purr. Surprised I asked what that was about. They have working cats at the place because a feed store is prime real estate for mice. Their cats are friendly but not that friendly.

Someone had dropped off the kitten. It was no more than 8 to 12 weeks old. (At this point I want to yell obscenities at anyone who would do that especially since there is a rescue group up the street.) This happened around 11 a.m. and I was the seventh customer that received that greeting.

They called it Parrot because of its shoulder perching. They were looking for a home for it. It was too friendly to be a barn cat. Their local cats were not happy . (I feel some jealousy here. This kitten was as cute as they come.)

Stab in heart. Brain in overdrive. This would be a slam dunk to re-home. Adopters love super-friendly. My first try didn’t work although I think it was a mistake. Such a friendly cat makes a great companion to a retired person who spends the majority of their time at home.

Mentally I made a note to check the next day. If no one had come forward I would take it. I could call it “fostering.” The last cat I fostered was Jake. Just about the time I found someone who wanted him, I refused to relinquish him and he stayed here for 18 years.

Still, I would do that if necessary but it wasn’t. The feed store posted later in the day that a dad came in with his daughter and they adopted it. It went to a good home that already had arranged for a vet visit. That was the best news of the week.

I’ve just killed 500 words telling a story. My real purpose is that I don’t know why I feel compelled to help. I’m sure other people admired the little guy and went on their merry way. Why did it haunt me all day? Why did I have to actively work on solving this? And of course, why did I think I would be the perfect foster when I know that I’m not?

I don’t get this same level of angst for people. Maybe I think that there are enough programs and people already dedicated to solving people problems. Or maybe I’m quirky. It is what it is.

Author’s note: I couldn’t wait to post until my usual Friday cat day. It’s been an active week here at the Cat Casa.

79 thoughts on “It almost happened again”