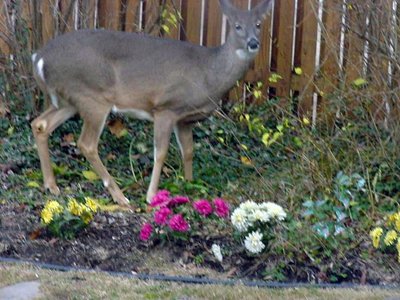 I’m always surprised at how much more you observe when you walk in my neighborhood during the early morning.

A home in a neighborhood adjacent to mine, has a statue of the Blessed Mother in the front yard. It looks just like the one in church only it is two foot tall and surrounded by flowers. When I was a kid all devout Catholics (those were the ones that were going to heaven for sure!) had a picture of the pope hung in the kitchen (on wallpaper with teapots) and a statue of Mary in their flower patch. I haven’t seen that in 50 years.

One of my neighbors had towels draped over her plants. All over the yard! Looked weird so I took a better look. (Where is my camera when I need it?) She was trying to protect her day lilies from becoming dinner for the local deer population. There was no color coordination with the towels so it was a patchwork pattern that made me wonder what her bathrooms looked like. Some things require extreme measures including going public with your bizarre color choices. 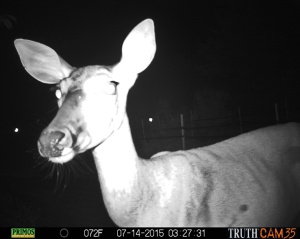 This is Lily our resident deer. She took a selfie of herself on our night camera.

Speaking of extreme measures, several years ago we bought a dog pen with a people door to surround our vegetable garden. I was tired of rigging up temporary fencing to keep wildlife (unsuccessfully) out of my garden. It was the best investment we made for our garden although initially it brought the cost of our tomatoes to around $25 a pound. You can read about that adventure here. It was a lot cheaper than having the same fence done by a fence company. Last week I noticed a lot of deer poop outside the fence. The herd must have been there salivating over my (out of reach) tomatoes!

Today is gorgeous in the ‘hood. Hope it is wherever you are too!

78 thoughts on “Sights around the ‘hood”