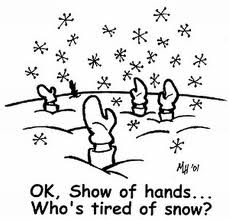 You can do better than that! – My birthday is in a few weeks and I’ve started getting birthday promotions from retailers. This week I received two from my healthcare company. One was to wish me a happy birthday and give me a tip on healthy living (no discount, no present, not even a tip I didn’t already know) and the other was an anniversary celebration of six years with them. That brought another healthy tip. Seriously?

Scene from the gym – The new gym has a locker room with lockers. You have to bring your own lock. On my first day I asked another woman if there have been issues with theft. She told me (in a New York accent) that she’s from the city and doesn’t trust anyone. She locked up her stuff. This week I came in when she was getting ready to leave. She had a magnifying glass on her lock so she could unlock the combination. She looked like Mr. Magoo. Way too much work for me. I would go old school with a key that I could put on an elastic wrist band.

Bummer! – We’d have record-breaking temperatures over the past few weeks. I realized that there will be no blue hydrangea flowers this year. Those buds are temperamental and freeze out below 20 degrees even in protected areas. Maybe this will be the year to replace them with something sturdier.

Note to Mother Nature – Enough with the cold and snow!

Note to bloggers and readers – For the past few years I’ve been posting four times a week. I’m cutting back to three. I’ll keep Random 5 on Sundays and Sassy Cats on Fridays with one essay midweek. There may be an emergency fourth posting in weeks where I run into stupid people who need a good  blogging! Also, for bloggers, the reader on WordPress hasn’t been working. Not sure what happened but now I rely on email messages when you post something new and it’s easy to miss. Hopefully this will all be temporary.