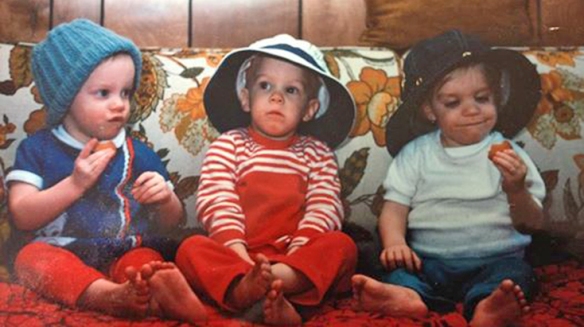 The triplets many, many years ago. They were part of the training crew.

No, not me! I didn’t have children but the beloved husband did. He raised four (including a set of triplets) by himself. All by himself.

I didn’t know him then.

His kids were high school age when I met him. He was dating a friend of mine. They split and we lost track until the mid-90s. I had moved back to the area and we reconnected as friends.

His kids have stories of the quick meals with fish sticks and frozen fries and Chinese takeout but they are good memories. (They’re in their forties. Can you really call them kids?) They are happy and successful and what more can a parent ask for?

There are many things that came out of this experience that benefit me.

First and foremost, he is patient. I never got that gene nor did I have children that forced it on me.

He can drive behind a putzer without complaint. A putzer is a driver who is going slower than the speed limit in perfect weather. I, on the other hand, blow my horn, say bad words and make gestures (the naughty kind). None of that works but I do it anyway.

About the only thing he is not patient about is his beloved baseball team. I guess that’s normal.

He can cook. Ok, it’s not  fou-fou gourmet cooking with exotic ingredients but he can grill better than most. He doesn’t overcook food. His chicken breasts are tender and his pork chops too. Nothing is dry or like cardboard. This good feature has made me less tolerant of bad grillers.

There is one thing that needs mentioning. He cannot buy one of anything. If I ask him to pick up a can of something, he will come back with a case or at a minimum, a half-dozen. I am sure that comes from raising four kids who ate a lot.

We are two people and relatively small eaters. I have learned the hard way (by tossing out expired or rotten foods) that it is best to buy onesies and twosies of things we don’t eat regularly — like tuna fish. Much as we like it, we rarely eat it at home.

I requested a can on a recent shopping trip and got four cans. We are good for at least a year or two.

It’s compulsive. Yesterday we were at a garden nursery less than five minutes from our house. We have scale (disease) on our yews (shrubs) so we needed something for that. I would have bought one container thinking that it’s close by, if I need more, I’ll get it when I need it.

Not the beloved husband. He bought two. I expect that will last two seasons.

I fractured my knee many years ago and he did the grocery shopping. Oh my! There was enough food to feed the Sixth Fleet. At one point I asked for some chocolate milk thinking a pint would do. I don’t drink that much of it. He bought a gallon. (No, I didn’t drink it all! Yes, I know it was chocolate but there are limits!)

All of this has helped me be a more patient person – not a lot, but a little.

He can overlook the fact that I have a type “A” personality with a whirling dervish side and four neurotic cats.

Hey, it takes all kinds!

27 thoughts on “The result of raising four kids”