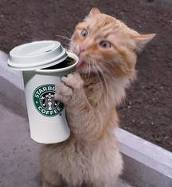 A cat after my own heart!

What? – Baby formula has hit the headlines but that’s not the only shortage. My local Starbucks has been out of mocha for four days! What’s with that? I must travel to another store to get my morning kick. Usually if they run out of something, it’s for a day or so. They get supply delivered a couple of times a week. Blight on cocoa bean trees? Russia hoarding the supply? Truckers rebelling against something? Another conspiracy story? If this goes on too long, I’ll have to hit the streets in protest!

Old memories – Speaking of shortages (or maybe not), the gas prices are painful. I lived through the oil embargo of 1973 when you had trouble finding gas at any price which was astronomical at the time. I had an hour commute to work each day, so it was stressful. There was no working at home back then. (The internet had not been invented. You want to get paid you had to show up.) I may not like paying the high price but I’m grateful that gas is available.

Different strokes – I don’t have much of a yard at my new house. Part backs up to a wooded area and the rest backs up to neighbors. One neighbor cleared an area in the wooded area and put a hammock in there. Why? I have no idea. I can see it from my home, and it looks like a tarp in the woods. By the end of the summer, it will look like a rag in the woods. He can’t see it from his home so I don’t know he put in my view. He’s not going to use it because it’s buggy. He’s also the neighbor that does crazy pruning – making mushrooms out of shrubs and hacking pompoms into trees. I’m more of a naturalist. If you put the right plant in the right place, you don’t need to savagely prune.

The dominoes start to fall – I have two older (much older) brothers and one of them passed away overnight. He is the first one to go. It’s sobering to think that we are the “old ones” in the family. RIP Joe.

Speaking of relatives – My grandniece moved into a brand-new home this weekend. I rarely see her but keep up through Facebook (yes, it does serve a purpose). I remember my excitement with my first all new house. It was magic. She also inherited the cat gene having four just like me and her mom! Bravo Jessica!