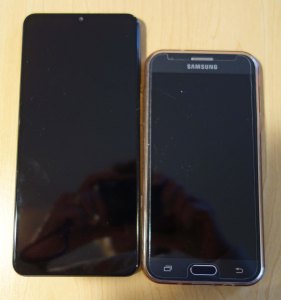 New on left, old on right!

I know this from personal experience. Every dang thing had kerfuffle’s. Every. Ding dong dang. Thing.

First don’t buy a new house. We went through germy houses and had to be sterilized. I considered having a steam room installed in my house that we had to go through before entering. Visitors too. We were fortunate to buy one not yet on the market meaning the only germy person who touched stuff was the owner.

Don’t sell your house during a pandemic. Germy people come through and you have to sterilize before feeling comfortable living in your own house.

Don’t move. We had three days to get out of our old house when the movers arrived. It was the height of the pandemic and they said they can’t work with a mask. I was sure we would all die. I directed traffic from at least six feet away. We had a miracle and no one got sick.

Don’t buy a car. There is no inventory. No choice. No negotiating. Just cha-ching, cha-ching.

Don’t buy a cell phone. Again not much inventory. The lovely phones at a reasonable price are not available. You can buy a bottom level version or a $$ one. There isn’t staff to help either at the buying end or set up. What should take a half hour takes days, waiting in phone queues and driving cross town.

You’ve heard me complain about all the other stuff. Here is my cell phone experience. I had to buy a phone as mine was dying. At one store there wasn’t a techie to help with the set-up and at it’s sister store they didn’t have the model I wanted. I bought at one store and drove to the other store clear across town to get help with set up. I stood in line. There were three people ahead of me. Not too bad or so I thought.

It took two hours for my turn to come up. The techie was working on multiple people and texting on her own cell. She had zero multi-tasking skills. She spent a half hour on my phone (we are now at 2-1/2 hours in the store, way beyond my limit. My brain is fried. Claustrophobia is setting in and I just want to get out.). She says she can’t transfer data. Something happens on the phone and I see some contacts and numbers appear. She sends me on my way and I am all too happy to get out.

When I tried to make a call I had no cell reception. The message said there was no SIM card. (I now know more about SIM cards than I want to!). After much diddling around plus google and YouTube, I figured out she put my SIM card in wrong. Sigh! I still had issues which required a call to my service provider. I was in queue for almost an hour. Fortunately I had the option of getting a call back so I didn’t have to sit there.

Service is fixed. The next morning I looked at my contacts. Only half of my contacts were transferred. There was no rhyme or reason on which ones they chose. Maybe they were sending me a message on my choice of friends. Rather than go through trying to transfer the rest, I added them manually. One. By. One. I had to install all my apps and give permissions. I felt like I was giving away my underwear sizes.

I now have a working cell phone that is too big for pockets and awkward to use. I put a date on my calendar when I will trade it in for one that is simple, easy and works with my small hands. It will be after the pandemic and when those doggone ships stuck at seas with all the cargo can sail. I don’t need to carry around a whole computer screen.

Yes, I’m blaming all this on the pandemic. During normal times I would have consulted with techies on which phone matched my needs. They would have been delighted to make a sale. There actually would have been knowledgeable people working and inventory. Maybe that has become a fantasy these days.

Anyhow I’m back in service.

83 thoughts on “Stuff not to do during a pandemic.”