Easter was special in my family. It always meant a new spring outfit for me. Holy Saturday brought blessed food which included ham, my Mom’s wonderful potato salad, an egg cheese that she only made at Easter-time and red beet horseradish for the dyed hard boiled eggs. Palm Sunday mass had a long gospel with presents of palms for all attending.

Easter also brought an end to any deprivations we vowed to do for lent. I always tried to give up something that wouldn’t be too painful. I am pretty sure that one year I gave up driving a car when I was 13. I liked to give up liver and onions. I never ate that awful stuff anyway. After all, lent was six weeks long so giving up something I really like wouldn’t be a good idea.

If we were lucky and it was a late Easter, the weather would be mild and blossoms would be blooming. Easter was always a favorite. It was a harbinger of the summer.

Oh yes, there were Easter baskets with jelly beans, marshmallow peeps and chocolate bunnies. First I would eat all the black jelly beans. They were my favorite. I hate black licorice so I don’t understand it but black jellybeans still hold a magic for me.

I would barter the marshmallow stuff. I wasn’t much for that uber-sweet goo. Sometimes I could trade them for a coconut cream egg or maybe peanut butter. I always saved the chocolate bunnies for last, savoring them into the summer. I also liked to display them and enjoyed looking at them. That is until the year I was around 8 or so.

Worst ever picture of both of us with Easter baskets. I am on left, Anita on right.

My niece Anita is only three years younger than I am. We were often playmates growing up. People say there is a family resemblance but I am not so sure. We are the same size and build but she always had natural red hair. Not the carrot-top type with the huge freckles but a very pretty strawberry blonde that deepened as she got older. She was not much into savoring the chocolate. For her, chocolate in hand was chocolate in mouth. Anyone’s chocolate to be precise.

That year I had displayed my bunnies on the window sills. I now know that didn’t make any sense since they could have melted from the sun. As I was admiring my treasures, I noticed that one of them didn’t have ears. Upon closer inspection, there were bite marks. As I went from window to window, all of my bunnies were equally de-eared. It didn’t take Sherlock Holmes to figure out who did it. Obviously the pointy ears were too much of a temptation….so, off with their ears.

I was mortified. I cried but no one offered to buy me new bunnies so I had to make due. It wasn’t the same. Eating chocolate bunnies that had someone else’s teeth marks was just gross. That was the last year I ever displayed my treasures. After that I kept them in the refrigerator or in my bedroom. There is no point in tempting fate…..or Anita. 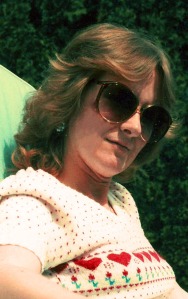 I am including a more current picture of Anita so you don’t think she still has those big cheeks (filled with my bunny ears!). Trust me neither of us look like that old picture!

17 thoughts on “The case of the missing bunny ears”