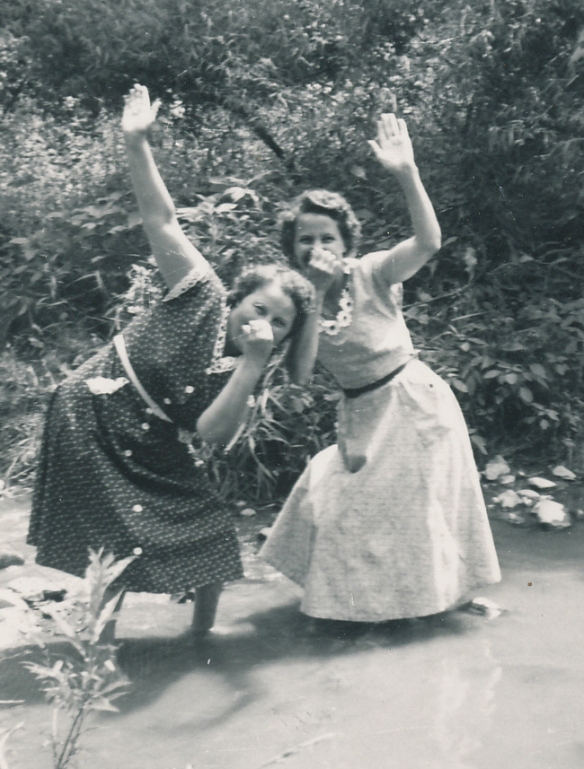 My mother (left) and her sister being silly! This captures the essence of her personality.

About a week ago I looked in the mirror and saw my mother staring back at me.

I was shocked. She’s been gone for decades.

It wasn’t the wrinkles. They are not new. It wasn’t that stray chin hair (that was a new one!).

We never looked alike. I share some of her features but have more from my Dad’s side. I am a different height, build and coloring. We never wore the same shoes or clothing. But I saw something in that mirror.

Part of it had to do with the dreadful haircut I got six weeks ago framing my face. It’s still growing out. I don’t wear my hair as short as my mother always did but it’s short now. She had beautiful chestnut colored hair that had shiny waves rippling all over.

My styling was similar enough to catch me off guard. Much as I complain about it, I like hair. Lots of it with lots of options that I never do. It’s not a chore for me. She was like that too. I have good memories of afternoons spent with my Mom and Lady Clairol! She was the mom who would have a purple streak if she were alive today.

It wasn’t just the hair. There was something about my smile that reminded me of her. Maybe it was my attitude too.

Here is a pictures of me with short hair a few years back. It’s hard to tell but I can’t see a resemblance.

My mother was progressive for her time. She thought for herself and lived her life as she wanted to. She was proficient in the dances of her day. She could twist her knees for the Charleston and wouldn’t be caught dead in tie shoes. She had a spark of mischief in her eyes.

We were so different in so many ways. Our experiences and upbringing were very different. She was raised during the depression. She sacrificed to give me opportunity yet instilled a sense of simplicity in my life.

Maybe similarities aren’t tied so much to resemblance but to values.

I wonder what she would think of her contrary daughter. Always the cheerleader, I hope she would be pleased.

60 thoughts on “The looking glass”