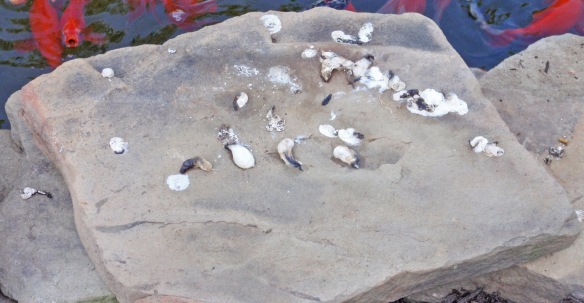 These are gigantic poops!

Pterodactyl sighting – I know they are thought to be prehistoric and no longer living. There is a band of them surviving locally. I haven’t seen them but I have seen their poop around my pond. What other bird would drop such large muffins on my stones?

What can I say? I’m a softy! This thing gets used a lot. It’s labeled so it doesn’t get thrown out.

Cowabunga! – I needed hip boots for cleaning the pond so we took a trip to Cabela’s. It’s a store that specializes in hunting, fishing and camping gear. The one closest to us is huge. Since I can’t kill anything (including spiders and bees – I have a re-homing kit in my cabinet) I was overwhelmed by the things they carry. There were enough guns and ammunition to stock the Sixth Fleet. I never saw so many fishing poles. They have a bunch of stuffed critters (so sad) but they also had a huge aquarium with live fish. And restaurants. My head was spinning from the sheer size of the place. I think people come in an RV and stay for a couple of days. Ironically they didn’t have hip boots in my size.

Cruising – I took a walk in my neighborhood. I saw what people had done to their yards as a part of spring cleanup. There were the usual square forsythia (argh!) and flowering shrubs pruned so hard that the flower buds were gone. I saw dead trees still standing and beautiful trees had been chopped down. A license should be required to prune. Most people don’t know how to make it look natural.

Stripes! – I took the plunge and put on crop pants this past week. That’s when I see how lily-white I am. Time to lather on that orange stripe-y tanner!

Yawn – The beloved husband had to be at the airport for an early flight so I drove. It was 5 a.m. It’s been a long time since I was on the road at 5 a.m. When I worked in training a long time ago, I would travel to field locations which would require early starts. I definitely don’t miss those days at all. There was only one car on the road. Unfortunately it was almost attached to my bumper all the way to the airport. The worst part was that Starbucks wasn’t open yet.

Mollie is on the header enjoying an open window on a wonderful spring day.