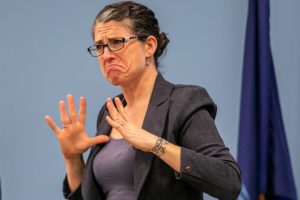 While watching all the various leaders give updates on the corona virus situation, I started to focus on the sign language interpreters standing at their side. I never realized it before but it’s not just about the hand movements. Their facial expressions said as much as their hands. Now I’m so fascinated that I don’t look at the speaker. Learn something new every day.

Shipments are wonky. I ordered some non-essential items on-line and received them in two days. Other deliveries are taking ten days to two weeks. Amazon deliveries are running long. I have an order from last week. I just got a projected date for ten days out. Odd. I saw some real gouging on Amazon from third party vendors. That should not be allowed.

There must be a prom coming. Over the weekend I developed a ginormous zit on the tip of my nose. The kind that scares babies and wild beasts. The zit itself is mostly gone but there is a red dot marking the spot. Bright red. The same color as a clown nose. I only get these when there is a prom or formal affair or anything that will require a photograph. I’m dusting off my prom gown.

We’ve been doing a grocery trip every four to five days. It’s amazing to see what is available and what isn’t. On the last trip I bought the best tasting tomatoes I’ve had in a long time. There was fresh parsley and basil and all the bananas you want. In fact there was a lot of produce. Not so much in the canned goods. You would think since the life span of canned goods is so much longer the supply would be better but that’s not so. Tuna was being rationed along with some other things. You can get all the yogurt you want but butter and eggs were in short supply. On my next trip I will need some pasta or noodles. I haven’t checked those aisles but I’m keeping my fingers crossed. I should also check my chocolate supply. No chocolate makes Kate a cranky blogger.

How are you holding up? Anything bizarre or unexpected that you experienced?